Regal Barça have once again shown why they are the best team in Europe. Barça won the Spanish Super Cup and Juan Carlos Navarro was made MVP of the competition.

This was the third time Regal FC Barcelona have won this trophy in what is proving to one of the most remarkable periods in its history. Vitoria was the venue and Power Electronics Valencia were the opposition, a side that put up a good fight but eventually succumbed to the Catalan might. 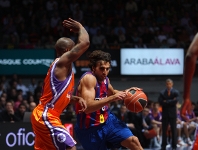 Pascual started with the same players he used in the semi finals, namely Sada, Navarro, Mickeal, Morris and an inspired Boniface Ndong. But it was Navarro who most shone from the outset, with 12 points in the first five minutes, and that was one of the main reasons for the early 20-5 lead.

But the Valencians bounced back from this early blitz, mainly thanks to Savanovic. With the score at 26-18, Xavi Pascual called timeout, but to little avail when Claver sent in a three tyo get the oranges back to within five (26-21).

Pascual sent Juan Carlos Navarro back out for the second period, using Víctor Sada as his play maker. Fran Vázquez scored early, but then over three minutes passed with no score at all. And then up stepped Gianluca Basile.

The Italian bagged five in a row to put Regal FC Barcelona well in command again (33-21). Ricky then led the tem as Pascual shuffled his pack, and the half ended with Barcelona +11 (40-29). 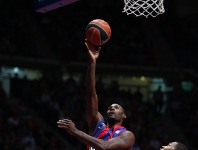 North American Pete Mickeal took command for the next ten minutes, and immediately scored six on the run (46-31). FCB were defending brilliantly, playing the ball around with style and also scoring points, including a tremendous three from Terence Morris and another from Navarro to make it +20 (57-37).

The Valencians needed some magic, and once again Savanovic was the source. But the comeback was nothing like the one before, and Grimau and Fran Vázquez both provided responses to those from the side coached by Manolo Hussein. The third period ended 63-47. 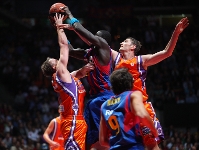 A Regal Barça victory was a certainty by now, so it was time for the players to enjoy themselves. They weren’t quite as overpowering as they had been against Real Madrid, but they still played serious ball and protected themselves against any unwanted surprises. Valencia kept their heads high until the end, and a Richardson three meant they were ‘only’ 12 points behind (69-57) with four and a half to play. But a Boniface Ndong three soon put paid to that and the clock wore down towards the third ACB Supercup for Barça, and the second in a row. 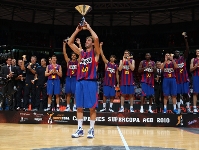