Regal Barça won the Catalan League with a convincing win against DKV Joventut at the Palau Blaugrana. Barça already had the game as good as won in the first half.

Xavi Pascual’s side once led by 28 points, although Badalona managed to cut that down a little. But there was no question which the best team was, and Terence Morris, with 17 points, was named MVP.

Regal Barça got the first five points, all through Morris, and DKV Joventut would be playing catch-up from then on. With some great 3-pointers, Barça were soon 17-9 groggy. The first period ended 25-15. 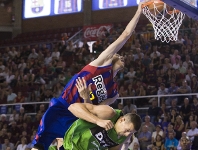 In the second period, Barça powered on (44-20) while Joventut just could not conjure up any kind of response, every Barça attack ended in a score, but the same was not true for DKV and Pepu Hernández just couldn’t find any answers.

In the third period, Regal Barça, with Ricky (9 assists) and Morris excelling to go +28. Only Norel (21 points) and Josep Franch could do anything for DKV, and at times Barça only seemed to be playing at half strength. And the whole team was contributing, with only Basile not scoring a point.

DKV Joventut did manage to pull back in the final period, but that was mainly because Regal Barça could afford to relax, with their fans already celebrating in the Palau. Little by little, the team was finding its touch in preparation for the season. 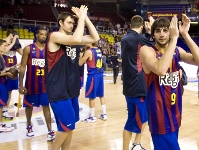