Regal Barńa star Ricky Rubio has announced that he will be playing for the Minnesota Timberwolves next season ¢fulfilling a lifetimeÆs wish to play in the NBA. Ricky thanked the Club for their support during his time at the Palau.

A million Euros and first choice to re-sign

Joan Creus explained the conditions of Ricky Rubio’s move, which were established when he joined Regal Barńa. Barńa will receive a million Euros, which will be paid by the Minnesota Timberwolves and the player himself, and will also have first option on him if he returns to the European game. Creus also took the opportunity to praise the player, claiming: “he’s left his mark here and I’d give him a ten for all aspects of his behaviour”.
At a packed press conference in the Camp Nou, Ricky Rubio announced his decision, flanked by teammates, Grimau, Navarro, Sada, Lakovic and Ingles, as well as coaching and back room staff, Club Director with responsibility for basketball, Joan Bladķ and technical secretary Joan Creus, Rubio spoke first and told the assembled media: “I’ve decided to undertake this journey and I am off to the NBA. It is something I’ve always dreamed of and now I’m able to live it”.

The Catalan player explained that he’d made the decision to switch to the NBA when he signed for Regal two seasons ago: “I never thought it would be this hard to leave here. I only have words of thanks for my teammates and for the Club”.

Success at the Club 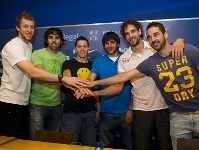 Reflecting on his two years with Regal, Rubio claimed: “I’ve grown with Barńa and have helped me win all the titles I have. Looking back, I’ve won all I could in Europe and that gives me more strength to continue and to move on”.

Ricky thanked his teammate – “they’ve always been by my side” - Joan Creus “because he made things easy and helped me so much over these last two years”- and Xavi Pascual -“he’s given me the confidence to grow and develop as a player”. The NBA bound player also explained that he knew what “more than a club” really meant now: “at first I thought it was about winning, but now I see it’s about the way the Club treat you –first as a person and then as a player”.

Ricky will go to play at the Minnesota Timberwolves and he explained: “it motivates me to go and play with the best. I’m a bit frightened –I’ve never lived outside of Barcelona –but I am excited about starting this new adventure. It’s still about basketball, scoring and helping the team to win. Physically, it’s tougher than Europe – I’ll have to start weight training and improve what I’ve tried to do better here in order to grow as a player”.