FC Barcelona are just one win away from their seventeenth league title after another convincing win, this time by 74-67 over Bizkaia Bilbao Basquet. 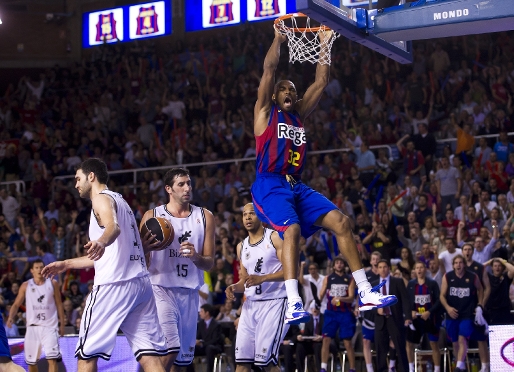 Venue: Palau Blaugrana 6,902 spectators.
Regal Barça were so solid in defence that Bilbao Basket could only make 67 points and were far less effective with their shooting that usual, and this now means that Barcelona have three attempts, two in Bilbao and one at the Palau, to win the ACB title.

Barça started brilliantly, with some quality defending and aggressive attacking that meant Bilbao Basket had made four fouls in just four minutes. Pascual clearly wanted to get the job done early, and Regal Barça were soon 10-5 with just over 3 minutes of the period to go. The period ended 14-11 with particular thanks due to Sada, who made his 550th assist in the ACB, and Juan Carlos Navarro.

The best of Regal Barça 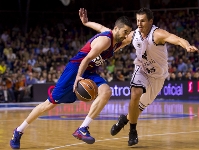 The second period started with a series of errors from Barça in attack and some foolish losses of possession by the Basques. But Ricky Rubio was making no mistakes, and a two from him made it 23-16 after four minutes.

That’s when it all started coming together for FCB, with Navarro sending home a three to make it 26-17. Joe Ingles and Anderson also made 3-pointers, and Regal Barça were sailing away at 32-20 with four minutes of the half remaining.

Bilbao Basket, with an awful free throw percentage of 50%, got two threes to narrow the gap, but Terence Morris then responded likewise for Barcelona. Half time came with the Catalans nine ahead at 40-31.

The opening minutes of the third period are always said by those in the know to be fundamental, and Regal Barça knew that. Joe Ingles was the star of a 7-0 streak in three minutes to set up the biggest lead so far, 47-34.
Bilbao Basket did all they could to get back into the game, but their shooting was going all over the place, and with the difference oscillating between 8 and 14 points, the period ended 54-40.

Bilbao fight to the end

Bilbao Basket tried to win back some honour in the last ten minutes. A 2-10 streak got them back to within six, but then Vázquez and Navarro produced their best to cancel out all that hard work, before two consecutive three pointers from Vasileiadis got Bilbao back within a nerve-wracking four. But Regal Barça never lost their confidence and triples from Lorbek and Navarro once again widened the margin, which was enough to win a game that means Barça now have three chances to secure the ACB crown.