Basile: "They gave me energy"

Basile: "They gave me energy"

Gianluca Basile was a picture of emotion. The gesture by the captains, Juan Carlos Navarro and Roger Grimau, to make him lift the Trophy touched his soul. "It was really something else," the Italian said, visibly moved. 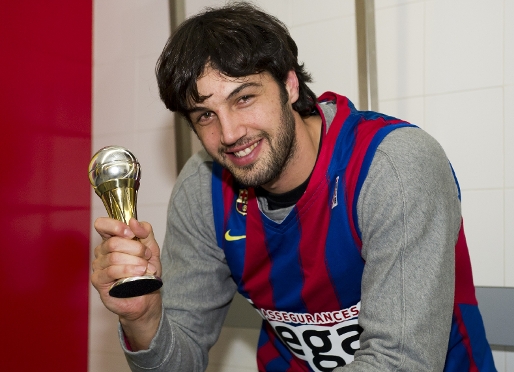 Pascual: "It’s the key to this team

Regal Barça coach wanted to emphasize the captains’ gesture. "No one ever puts their own individual interests before the group," said the Barça coach, who cited another example: "I liked watching how Pete Mickeal was involved in the warm-ups, helping his teammates." All these things are, according to the coach, "a clear example of what a team really is."
He’s going through one of the worst moments that an athlete can go through. When he almost turned the corner to be able to return to the courts, Basile had a recurrence of his foot injury. Yesterday, the Italian received a morale boost in to aid his recovery. In an emotional and spontaneous gesture, Roger Grimau and Juan Carlos decided it it should be their teammate who would lift the trophy won in the Palacio de los Deportes.

"It was a really great gesture. I am pretty low after the injury and this has given me strength, a willingness to work and a desire to return soon. This is a great team with great men," said a visibly moved Basile, who acknowledged that "away from the courts one suffers a lot"

In full celebration, Navarro and Grimau explained that the gesture had been pretty spontaneous. Navarro indicated that Baso "deserves it, he’s a great teammate who always has advice for the rest of us, has worked very hard and it’s a pity that he could not be in the final." Navarro also shared a thought for Pete Mickeal, the other notable absentee from the final.

For his part, Grimau said: "We know what he’s going through and if this gesture has helped to encourage him, even for five minutes, that’s great."