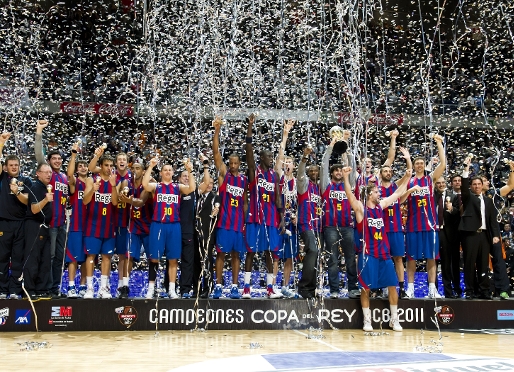 22 titles: Regal FCB and Real Madrid
8 titles: DKV Joventut
6 titles: Caja Laboral
3 titles: Estudiantes
2 titles: Rayo, Laietŕ, Picadero and Zaragoza
1 title: Patrie, L'Hospitalet, Espanyol, Manresa, Valčncia and Mŕlaga
Barça have shown great consistency in this year’s tournament, getting better with each game. Although they went through the quarter finals with a clear 20 point win(86-66), they were made to suffer at times by Juventut, whilst in the semis against Caja Laboral (92-73) they had more focus and tonight’s win against Real Madrid showed they could lift their game that one step higher when they most needed to. 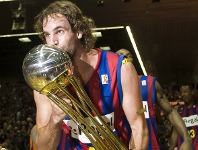 Xavi Pascual, who last year became the youngest ever coach to win a Euroleague title, continues to write his name in the history books, as only the second coach to retain a Cup title – an event that requires great efforts from a winning team, who this year needed to win three games, with barely 24 hours rest in between. The other famous coach to win two Cup titles on the run, apart from Aito, was Real Madrid’s Lolo Sainz in 1985 and 1986.

From Laietŕ to Real Madrid

Barça made their Cup debut in 1942, losing to Laietŕ 30-28, but the following year the team got their revenge beating Laietŕ 27-25 in the final held in Mallorca. The club has gone on to win on 21 more occasions, with all the different formats the competition has had. 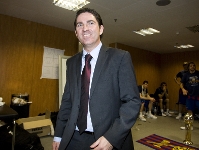 Seasons 1986/87 and 87/88 was the most recent time that a team won two Cup titles on the run, when Aíto García Reneses’ team followed up their 1987 win over Ron Negrita Joventut, 110-102 in the centenary final in Tenerife with another title against Real Madrid in Valladolid the year after. The 84-83 win that year was won by a fantastic last gasp three pointer from Nacho Solozábal.