Regal FC Barcelona are into the cup semi finals after beating DKV Joventut. Although Barça seemed in control of affairs, it was anything but an easy match, and had all the hallmarks of a typical quarter final. 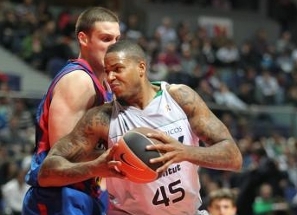 Referees: Redondo, Bultó and Perea.
Lakovic, Ndong, Grimau and Ingles produced the goods when required, and FCB now go on to face Caja Laboral, who overcame Bizkaia Bilbao Basket with considerable difficulty. That game starts on Saturday at 20.30.

Pascual’s side went out strong and flew into a 7-0 lead, but an immediate response from former Barça man Trias and a 2+1 from Hosley got Joventut back into things after a torrid start. With seven minutes of the period left, Ricky, who had two fouls, was replaced by Sada.

But Barça were not getting a grip on the game, and the Penya produced another 2+1 on 5 minutes, this time for an Anderson foul on Franch (10-11). A lost ball straight after led Pascual to call time out and shortly after two frees from Robinson put the green and blacks ahead by four on 10-14. It was then that Grimau found the right kind of character, and assisted by Sada, the Barça comeback appeared. They were soon back in control at 20-16 and now it was Pepu Hernández who was calling time out. The period ended 24-18 with a great score from Jaka Lakovic.

With Ingles and Terence Morris on court, assisted by Lakovic, it looked like FCB were going to fly away with it, but once again La Penya proved strong until a three from Morris 7 minutes before the break put Barcelona well ahead at 29-21. The team was clearly inspired by Jaka Lakovic’s leadership skills, with the Slovenian bringing out the best in colleagues like Ndong, and the ten-point barrier was finally breached at 35-25, five minutes before the half concluded.

Pascual then rotated his bench, and not to the best of effects, because Badalona started narrowing the gap (37-31). It was time for Lorbek and Sada to take the places of Morris and Lakovic. But Boniface Ndong stayed on court and was strong on the paint and in stealing possessions, with the half ending with Barcelona 43-33 up. 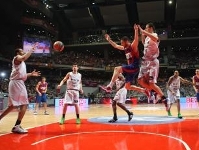 Ricky Rubio, who had only played three minutes, started the second against his former team and flung home a triple at his first attempt (46-35). La Penya again responded, with Hosley getting them back to within six (46-40). This was Barça’s poorest period, but thankfully Roger was there to keep things afloat.

Joventut started relying on some magnificent plays from McDonald and the gap was down to just three (50-47). And then a Franch counter culminated by former FCB man Trias put Pepu Hernández’s side within a point (52-51). But the best of Ingles was about to come. The Australian bagged a three and added a free throw to make things look much more comfortable at 58-52.

Another three from Ingles started the final period off nicely, although three frees from Pere Tomás kept Jovrntut in the hunt (61-55). A Jaka Lakovic triple seemed to have the game done and dusted (64-55), although there were still five minutes to go and Joventut had not thrown in the towel quiet yet. But despite their gallant effort, Barça kept scoring, and by the time they had gone +12 at 70-58, the semi final place was assured.

Ndong, Roger, Lakovic and Ingles were rested at the end, with some of the bench players getting a run out. Barça could afford to relax. There was no way back for the Penya now, and the defending champions of the Copa del Rey are in tomorrow’s semi finals.