The FC Barcelona rugby team has celebrated its 85th anniversary with a festival, which included a game against USAP Perpignan.

During the festival to celebrate the 85th anniversary of FC Barcelona rugby team, club president Joan Laporta stated that the festival showed “the great respect the club holds for its historical heritage”.

The Blaugrana president and other club officials were present during the commemoration, which included a much anticipated game against USAP Perpignan.

Despite losing 17-31, coach Arturo Trenzano expressed his satisfaction: “We wanted it to be a festival, and it has been. We’ve been working hard for eight weeks, and this match has been the reward for all of us”. The team are at present second in the ‘Divisió d’Honor’ B, and they are looking to be promoted back to the first division.

A celebration for everybody 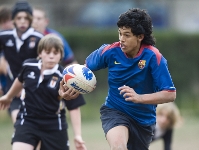 During half time, commemorative awards were given out to people involved in Barça rugby past and present, including members of the Catalan Rugby Federation and veteran players. The festival was also attended by junior players from the Federation, and a game was held between FC Barcelona and BUC’s junior sides. Official photos were also taken of all the teams.

FC Barcelona president Joan Laporta: “Rugby is a noble sport. FC Barcelona has a team at every level and we have great experience”.

Enric Abella, FC Barcelona’s rugby delegate: “The rugby side also has a following all over the country”.

Ramon Rebugenc, USAP Perpignan’s head of external relations: “I’m proud to be here on a day like today with a club like Barça”.