After an amazing Saturday with eight medals, the following day no fewer than sixteen other FC Barcelona athletes medalled in the Spanish Championship.

That’s a total of twenty four medals for FC Barcelona. Angel David Rodriguez was the big star of the weekend with a treble of the 100 m, 200 m and 4x100 relay. Albert Velez in the pole vault and Sergio Sįnchez in a gripping 5000 m race took silver.

Rodriguez got off to a great start in Saturday’s 100 m. “I will try to win all three” he said. “Like the football team, but on a smaller scale”. And so he did. A day after he was first in the 200 m, running in 21.07 and then added the 4x100 relay along with Jackson Quińonez, Įlvaro Aljarilla and Julian Lozano. 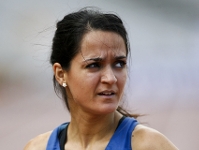 Cristina Bįrcenas won the heptathlon with 5,786 points. Eva Martin came home first in the 200 m with a time of 24.42. Ursula Ruiz and Irache Quintanal came first and second in the shot put, throwing 16.15m and 15.73m respectively. In the 4x400 relay, Laia Vilalta, Cristina Casimiro, Olga Ortega and Eva Martin took gold by clocking 3:41.55. Laura Redondo took silver in the hammer with a throw of 61.27m.

Olga Ortega in the 400m hurdles finished on 1:00.03 and Marta Miró jumped 6.04m to take long jump bronze. The decathlon came to a close finish, all decided in the final event, and Agustin Felix eventually came third with 7,179 points. Young Marc Orozco got his season’s best in the 400 m, 57.07. And there were also medals in the other relays: Marc Orozco, Jordi Rabal, Pau Fradera and Manuel Olmedo came third in the 4x400 with 3:14.39 and Plįcida Martķnez, Cristina Bįrcena, Marta Miró and Cristina Sanz did likewise in the 4x100 with 47.25. 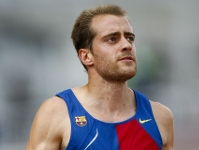 Six athletes managed to achieve the minimum mark to go to the World Championships in Berlin. The Minimum A was reached by Manuel Olmedo in the 800m, Ruben Palomeque in the 3000 m steeplechase, Įngel David Rodriguez in the 100 m (and Minimum B in the 200 m), and Alessandra Aguilar in the marathon. Judit Pla registered Minimum B in the 5000m.