Barēa have won the League after beating Puigcerdą 5-2 in the second playoff game. Evgueny Semeriak’s men came from two nil down to win with a hat-trick by Pablo Muńoz and two strikes by Jonas.

Barēa picked up the League Champions title for 2008/09 in the second playoff game. Seven years after their last triumph they are once again the best side after finishing top in the regular season and winning the playoffs.

Puigcerdą were determined to put on the pressure to force a third game and immediately took the lead.

But Barēa soon fought back and Pablo Muńoz made it 1-2 just three minutes later.

The speed of the game helped the home side take control in the first third and dominate the second.

Puigcerdą wouldn’t take a backward step but Barēa equalised after two minutes in the period when Swede Jonas Norberg smacked home the goal that made it 2-2.

Then came the third from Pablo Muńoz as he netted his second. 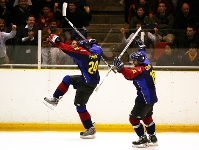 Jonas then made it 4-2 to effectively kill off the game, though the home fans still looked anxiously at the clock in case Puigcerdą might spring another surprise. But it wasn’t to be and Muńoz got his third to round off a great season and make it 5-2.

40-year-old veteran skipper Enrique Zapata then lifted the trophy with a tear in his eye and a big smile on his face. 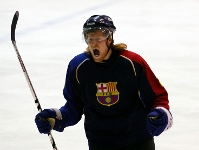 After the celebrations Barēa will get back to work for the King’s Cup and their semi-final which is also against Puigcerdą. It will be decided by a single game on Saturday 21 March. The other semi-final will be between the winners of Majadahonda v Gasteiz and Jaca v Txuri Urdin.

The final is in Logronyo on 28 March. 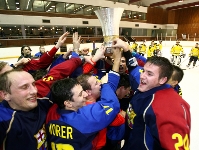