FC Barcelona athlete RosalĒa Lßzaro came seventh in the long jump final at the Beijing Paralympics. LßzaroÆs best jump was 5.52, some way off the 6.28 set by the gold medal winner, Ukrainian Oksana Zubkovska.

RosalĒa Lßzaro made four jumps and her second, at 5.52, was her best. She got a total of 999 points and finished in seventh place.

The gold medal was taken by Oksana Zubkovska who totalled 1,137 points. The Ukrainian made an early statement of intent with a first leap of 6.15. She followed this up with 6.22 and a last jump of 6.28.

There was more competition for the bronze and silver medals, with five athletes battling it out. In the end the silver was taken by Byelorussian Volha Zinkevich and the bronze by China’s Miaomiaou Liu.

Cuba’s Daineris Mijan was also in with a shout of a medal and her 1,033 points left her just 6 short of getting the bronze. 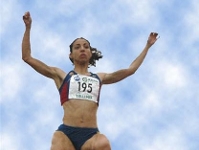