First Barēa medal at the Paralympics

First Barēa medal at the Paralympics

FC Barcelona athlete Xavier Porras has picked up the first medal for a Barcelona sportsperson at the Beijing Paralympics. He has won a bronze medal in the triple jump.

Today Xavier Porras stepped onto a Paralympics podium for the first time after the category F11 triple jump for athletes with total blindness. He picked up the bronze medal with a jump of 12.71 m in a competition won by China’s Li Duan, who broke the world record with a distance of 13.71 m.

Pleased with the medal 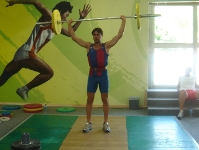 “I’m really happy,” Xavier Porras told www.fcbarcelona.cat shortly after the medals ceremony. “Even though I’ve jumped further than the silver medal winning distance this year, a medal is still a medal.”

The competition was really tough. Despite being in the lead after the first round, Porras was overtaken in the second by Li Duan who set what was to prove to be the gold medal winning distance by leaping more than 13 m to take top spot.

In the last round Xavier Porras produced his best jump of 12.71 metres, and it looked as if that would be enough to get him silver.

But then Azerbaijan’s Zeynidin Bilalov, who up until then had made one jump of 10.69 m with the rest being void, leapt 12.80 m to push Xavier Porras into a very worthy third place. 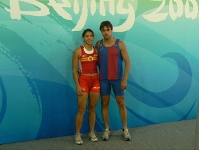 The other Barēa athlete at the Paralympics, long jumper and sprinter Rosalķa Lįzaro, is to take part in the long jump final for her category on Sunday at 3.20 am Catalan time in Beijing. Lįzaro has a good chance of winning a medal as she did so at Atlanta and Athens, when she won silver, and at Sydney, where she took gold.