Jackson Quińonez, Olympic 110m hurdles finalist, changed events for a day. He went in for the high jump, and won!

This weekend the Catalan Indoor Championship in Vilafranca enjoyed the unexpected presence of 110m hurdles specialist Jackson Quińonez. But the FC Barcelona surprised all by entering the high jump competition, and with a height of 2.12 metres, he topped the podium.

“I could have done much better” 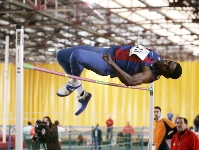 Quińonez spoke about his achievement. “I was very nervous, I didn’t know how things would go. When I got to 2.12 m I’d already made 10 jumps, it was really tough.” Pleased with his performance, Quińonez is convinced that if he hadn’t felt so tired “I could have done more, maybe another 5 or 6 centimetres.”

It was the need for a new challenge that led him to do such an unusual thing. “I decided to enter this event because after being in the Olympics it’s hard to get excited about things. It was an event that motivated me, that fed my fighting spirit, and it has helped me a lot. Unfortunately, the other hurdlers in Catalonia are well short of my times. This was a new challenge, I wanted to get my competitive spirit back.”

Back to his origins 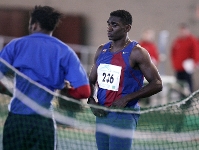 But the high jump is nothing new to this nationalised Ecuadorian, for he used to compete at it before becoming a pro hurdler. “I have a history in the high jump. When I was young up until about 2001, I used to do the hurdles, long jump and high jump. I jumped 2.20 when I was 20, but I was younger and lighter then. Later I decided to work on the hurdles full time. It is easier to improve seconds than centimetres”.

The high jump has added variety to his training schedule. “Since I returned from Beijing it has been about mentality. After each hurling session, I’d do some high jump practice, it was the excitement that drove me, but it was very hard”.

Despite his odd decision, Quińonez is convinced that “any athlete of my level can do just as well in any of the other events”. 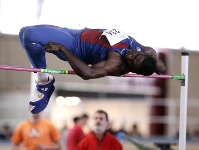 The 28 year old FC Barcelona athlete has no plans to go any further with his high jumping. “It was something to amuse me, a way of gaining oxygen, and it didn’t go bad for me … I’d like to try out other athletics events” but with a smile he added “I am a bit too old for now for trying out too many things ".

His main focus now is getting ready for the European championships in Turin. 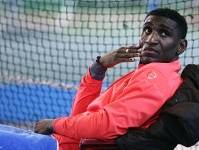 Other than his professional motives, Jackson Quińonez also commented that his unusual entry came about as the result of a bet. “Some of my colleagues, one day in training, commented that they bet I wouldn’t be able to jump two meters. If I could do it, then I could get what I wanted, let’s say a supper. When they saw me training to do it, they realised I was taking the bet seriously. And the bet worked out pretty well I think!” laughed the athlete.