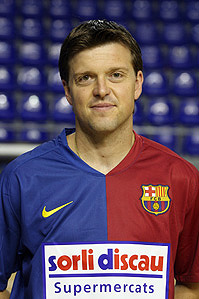 Teixidó started playing roller hockey with his hometown team CP Voltregŕ. Despite his youth, he made an immediate impact and earned a transfer to one of the sport’s great clubs, Reus Deportiu.

He spent five seasons with Reus and put the club firmly back at the top of the sport – Reus hadn’t won anything for 19 years – but then decided for a change of scene, on both personal and sporting grounds. The chance to return to his roots weighed heavily in his decision to join Barça but becoming part of the best team in the world was an even stronger attraction.

Teixidó is an intelligent player, left-handed, a great skater and a great passer. His style is based on his generosity and ability to make the rest of the team play, a quality that is much valued in roller hockey. He is one of the most highly regarded centerman in today’s game and also contributes with his goals. He is an important element in the future project of FC Barcelona Sorli Discau.