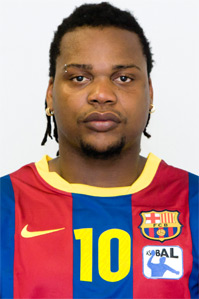 Sorhaindo is a French playmaker with plenty of international experience. He was European champion with his national team and has now made the move from the French championship to try his fortune at FC Barcelona.

Born in Trinité (Martinique), Sorhaindo started playing handball with Gauloise de Trinité at the age of 15 years. He moved to France to play for Angers Noyant and at the age of 20 was snapped up by París Handball, where he has spent most of his career. It was there that he won the French Cup in 2007. In the 2008/09 season he was named best defender and playmaker in the French League, but his club was relegated, which was a major blow to the player’s progress. Midway through the 2009/10 season he moved to first division Toulouse, and at the end of the season, he signed for FC Barcelona.

He is a product of the same generation as national star Nikola Karabatic, and both players have excelled in the French national jersey. He made his debut against Spain 2005 in the Supercup of Nations. With France, he won the World Championship in Croatia 2009 and the European Championship in Austria 2010. Sorhaindo plays in defence for France alongside Didier Dinart, and is the natural successor to Bertrand Gille.

Sorhaindo is a physically powerful central players. He weighs 100 kg and is 193 cm tall, making him highly corpulent and intimidating to play against. He is a versatile defender, but can also score goals. He may not be as mobile as other players in his position, but he is extremely strong in the one on one and will add something new to the Barcelona team in this area.