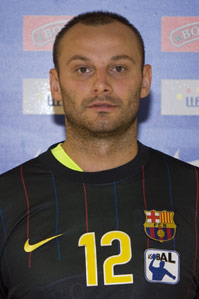 Daniel Saric is a goalkeeper that knows the Asobal well. The Serbian international has played in the league since 2003 and has been with some of the biggest teams that have challenged for honours.

Starting his career with Borac Banja Luka, Saric rose through the youth ranks before making the move to Red Star Belgrade's handball team. He spent two seasons growing as a player before opting to then join Sintelon in 2001 and there he stayed for another two years. The move to the Asobal came when Teka Cantabria signed him in 2003, but he only stayed 12 months before moving on yet again to Alcobendas. A two-year stint at the club ended when he joined Ademar only to switch teams one last time before joining Barça as he played for Portland San Antonio.

On the international front Saric has played for Serbia on 50 occasions.

Saric is a goalkeeper from the Balkan school of handball that has a long tradition in the sport. But he was comfortable adapting to the Spanish when he moved to the Asobal. One of the most outstanding characteristics of the new Blaugrana keeper is his consistency throughout a season. It is that quality that helped to stop 30 per cent of all throws sent his way. The 2008/09 campaign saw him named as the fifth best goalkeeper in the Asobal.