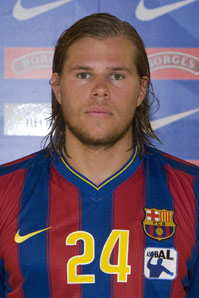 Hansen is one of the great young stars of Danish handball. Despite his young age the player knows all about the responsibilities of playing top flight handball and in the Champions league, which is just what will be expected of him at Barça.

Mikkel Hansen will be playing in the Asobal league for the first time, having previously worn the colours of GOG Svendborg Gudme, who he joined for three year in the 2005/06 season, where he improved considerably as a player and gained some very important experience. Before playing for Gudme, Hansen had been a youth player at Virus Sorgenfri Handboldklub 2002 for two years (2003/05), having originally learned the game at Helsingor.

Hansen has played for his national side twice, and was in the Danish squad that won the European Championship in Norway in 2008.

Young Hansen has an excellent long throw. He is almost two metres tall and weighs in at 96 kilos, which makes for an imposing defender. He will add important strength to the Barça team.