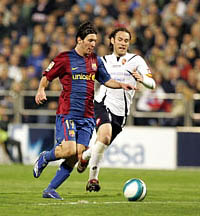 FC Barcelona completed an impressive comeback as they overturned a first leg deficit to beat Real Zaragoza and qualify for the semi finals of the Copa Del Rey, thanks to goals from Xavi and Andrés Iniesta.

In what was the first cup game in the space of seven days where Barça need to turn the result around, Frank Rijkaard's team were successful and must now hope that they can repeat the trick next week against Liverpool in the Champions League. The scoreline in La Romareda failed to show the dominance of the visiting side, but strikes from Xavi and Iniesta were the fruits of an excellent first half display. The result will have buoyed the team and will see them go into the league encounter at Sevilla on Saturday full of confidence. The trip to Anfield is then followed by the visit to Camp Nou of Real Madrid in the league.

Rijkaard altered his tactics to suit the task ahead of the team as he named three central defenders, with four midfielders ahead of them and the traditional three-pronged attack. Rafael Márquez sat in front of the trio of centre backs and helped close down the space available to the opposition to great effect. Ronaldinho was given, virtually, a free role alongside Leo Messi and Ludovic Giuly up front and the move paid dividends as Barça attacked from the start and caused problems in the opening minutes. The move disconcerted Zaragoza, who were expecting to sit back and defend the one goal lead they had secured in the first leg.

As expected, Víctor Fernández's side played on the break and used the left-sided Juanfran to look for ways to break through the solid Blaugrana rearguard. The system allowed the visitors plenty of possession, however, as Barça ended the 15 minutes with 67 per cent of the ball. All that was missing was a goal, but the duly arrived in minute 18 when Xavi won posession in the centre of the field and edged forward before exchanging passes with Márquez to beat César and net the opening goal for the away team in some style.

Not content with just one goal, FC Barcelona pressed forward for the all important second and they went close after 21 minutes when Messi tested the Zaragoza keeper. That was a warning that was not heeded as the Argentinian had another chance, which César again stopped, but this time the rebound fell to Iniesta and he made no mistake to double the Blaugrana's advantage. The second strike allowed Rijkaard's men a slight moment to step off the pace, but they almost paid dearly for doing so as Zaragoza created two good opportunities of their own. Sergio García fired against the woodword from distance before Óscar fired over from close range when it looked like he was going to reduce the deficit.

Those chances though were the last that the hosts would have for a while as Barça regained control. With Lilian Thuram and Carles Puyol outstanding at the back, the visitors were able to build their attacks and move the ball around at great speed. Ronaldinho and Messi both had chances to add a third before the break, but they were not taken. As the break approached, the Blaugrana let the ball do the work as they moved around the midfield with great efficiency and forced the opposition into running around in order to regain possession.

Despite being ahead and looking comfortable, Barça knew that the game was far from over as Zaragoza opted to introduce more creative players as Albert Celades and Pablo Aimar entered the fray in place of José María Movilla and Óscar. The move gave Fernández's team a lift and with the supporters behind them, they pressed forward. Barça were keen to lift the tempo again though and Xavi and Iniesta were at the centre of their team's effort to begin the fluid passing game once again. Deco then had two chances in quick succession as he went close with his second chance after having beaten three players to tee up a shot that came back of the frame of the goal. If that had gone in then the game would have been over, but instead Zaragoza retained hope of pulling themselves back into the tie.

The hosts' chances of mounting a comeback were dealt a blow when Andrés D'Alessandro was sent off after 69 minutes. It appeared that Rijkaard's side would be able to enjoy the final minutes, but that proved to be wrong as Gerard Piqué pulled a goal back soon after to set up a thrilling finish. Gianluca Zambrotta came on for Giuly in a bid to stiffen the Barça defence and return to a more familiar 4-3-3 formation. It proved to be a decent switch as the visitors looked better equipped to deal with the threat from Zaragoza, but they still had to survive a few scares before the end as Carlos Diogo and Eweerthon both went close. It proved too hard a task for the home team and the final opportunity of the evening actually went to Barça as Messi hit the woodwork having already gone past the keeper.