Full information about the Miami franchise 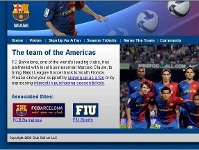 The new franchise will play its home games at Florida International University’s stadium. The ground is used for both American football and soccer and seats 18,000, though capacity can be expanded up to 25,000 (average MLS gates are around 15,000 fans). It is near the city centre and very easy to get to, and means that the new franchise will not have to build a new stadium, unlike other bidders.

Full information about the Miami franchise

The aim of the MLS franchise in Miami is to ramp up Barça’s presence in a strategic market. Barça is bringing its experience in the sector and its brand to the project.

In a globally competitive marketplace where the top clubs are owned by East European or US businesspeople and traditional revenue streams appear to have dried up, FC Barcelona also needs to be global in order to remain competitive. Most clubs are in fact seeking to expand their markets, with tours of Asia and the US as the main means of achieving this goal.

The specific model of Barcelona – which, as is well known, is a club owned by its members – means that it has to be a pioneer and grow to defend its philosophy. It is for this reason that Barça is looking to set up a regular structure in the US by taking part in a Major League Soccer (MLS) franchise. In recent days the finishing touches have been made to its bid to become joint owner of a Miami-based team with Bolivian businessman Marcelo Claure.

What does Barça bring?

Barcelona will have full responsibility for the sports side of the project, meaning it will appoint coaching staff and set signings policy. In short Barça will be exporting its way of doing things by contributing its knowledge of football, its image and its brand while retaining control of them. The name, colours and badge of the team have yet to be decided; this will be done when the MLS announces the sites of its new franchises (between the end of 2008 and start of 2009). The new team would not be a section of the club.

Miami is a strategic location

The south of the state of Florida is undergoing population changes with an influx of people from Latin America (Brazil, Ecuador, Venezuela, etc.) who are very interested in football. Moreover the area also has a developed and thriving economy.

Bolivian businessman Marcelo Claure is Barça’s key partner in the operation. He is currently chairman of FC Bolívar (with which FC Barcelona has a partnership agreement), was vice-chairman of his country’s federation the only time Bolivia played in the World Cup finals (1994) and currently heads telecoms firm Brightstar Corporation.