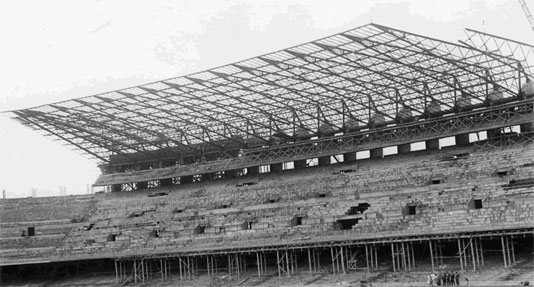 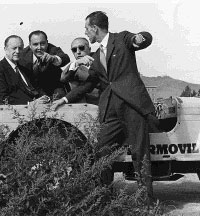 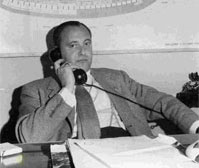 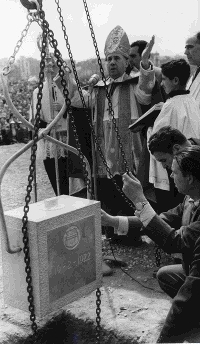 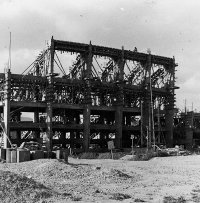 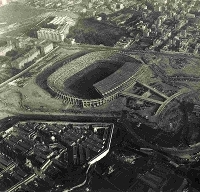 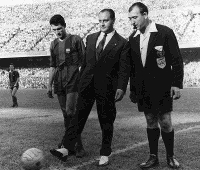 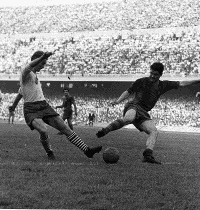 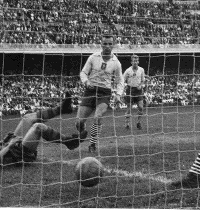 You can tell a lot about the success or decadence of a sports club from the type of facilities it uses. In terms of FC Barcelona, the club’s history can be clearly be divided into three main stages.

In the early days, the club constantly switched between different grounds. In the second stage, the club was consolidated by finding a permanent home at Les Corts. And the third stage, and the construction of the Camp Nou, reflects the expansion and grandeur of the club on a global scale.

The old Les Corts ground, inaugurated in 1922, was remodelled several times in order to find room for Barēa’s constantly growing fan base. After the Spanish Civil War, the club started attracting more and more members every year, which also meant a considerably larger number of spectators at matches. This increased support was the inspiration for several expansion projects, of the south goal (1946), the north goal (1950), and the grandstand’s capacity (1944). But it was becoming patently evident that what the club really needed to do was build a completely new stadium, and therefore the board of directors combined these improvements to Les Corts with plans to make the dream of a new stadium a reality.

The need for a new stadium

From 1948, people were more and more keen on the idea of building a completely new ground, but this was not an easy thing to do, and it was necessary to convince the local authorities that a new stadium would be able to fit in with the plans at the time to develop the upper area of the Diagonal.

It is often said that what finally convinced the board that there was no other option than the construction of a new ground was the arrival of the now legendary Ladislau Kubala, one of the finest players ever to appear for FC Barcelona. And although there can be no doubting that Kubala attracted more interest than ever in the team and meant the club’s spirits hit a new high, the decision to build was inspired just as much by the two League titles won in 1947-48 and 1948-49, which was before the great Hungarian had signed for the club.
In fact, the first solid step towards a new stadium came in September 1950, fifteen days before Kubala played his first friendly match wearing his new Barēa colours. It was then that the president of the time, Agustķ Montal y Galobart, signed an option to purchase a site in the area known as La Maternidad, an option that was to be taken up just two months later.

What followed was a turbulent period, as the Camp Nou commission decided on February 9, 1951 to change the location of the future stadium to the area at the top of the Diagonal, and this led to a series of sterile negotiations with the Authorities that did not seem to be getting anywhere. The matter seemed to have been shelved for good when Francesc Miró-Sans won the FC Barcelona presidential elections on November 14, 1953. The new president was a fervent supporter of the idea of building a new stadium as soon as possible and one of the first things he did after coming into office on February 18, 1954 was to locate the future stadium on the site purchased in 1950, rather than at the top end of the Diagonal. And so, on March 28, before a crowd of 60,000 Barēa fans, the first stone of the future Camp Nou was laid in place under the presidency of civil governor Felipe Acedo Colunga and with the blessing of the Archbishop of Barcelona, Gregorio Modrego.

The architects of the new stadium were Francesc Mitjans Miró, cousin of Miró-Sans, and Josep Soteras Mauri, with the collaboration of Lorenzo Garcķa Barbón. More than a year later, on July 11, 1955, the club commissioned the construction work to the INGAR SA company, who estimated the project at 66,620,000 pesetas, claiming it would take 18 months to complete. However, the stadium would eventually cost an awful lot more than the original estimate, eventually totalling around 288 million pesetas, an amount that would need to be covered by successive issues of mortgage obligations ((100 million pesetas) and short term bonds (60 million pesetas). This measure meant the construction of the stadium could be financed, but would leave the club in heavy debt for many years after.

The date on which the stadium was to be inaugurated was September 24, 1957. A special commission was organised whose task was to organise the kind of opening ceremony that the occasion warranted, with two people in charge of the operation: Aleix Buxeres (public relations) and Nicolau Casaus (organisation). In the Barcelona City Council’s Salón de las Crónicas, on Saturday September 21, José Marķa de Cossķo, a member of the Real Academia Espańola, solemnly declared the celebrations of the inauguration of the new stadium open. That same September weekend, a series of international matches were played at Les Corts and the Palacio Municipal de Deportes involving the club’s different sports teams. Those days will go down in club history, and were set to words by the great poet Josep M. de Sagarra in his sonnet titled 'Azul Grana', while an anthem was written in honour of the new FC Barcelona stadium, with Josep Badia putting the words to Adolf Cabané’s music.

On the day of the 1957 Mercč Festival, the city was decked out in the FC Barcelona colours. The celebrations continued with the holding of a solemn mass and the blessing of the stadium by the Archbishop of Barcelona, Gregorio Modrego. The Orfeón Graciense choir then performed Händel’s ‘Hallelujah’ while the image of the Virgin of Montserrat was exalted. The president’s box was packed with the most important personages of the sporting and political worlds of the period, including club president Francesc Miró-Sans; José Solķs Ruiz, general secretary for Movement, which was the equivalent of the ministry of sport at the time; José Antonio Elola Olaso, head of the National Delegation of Sportspeople; Felipe Acedo, civil governor of Barcelona, and Josep M. de Porcioles, Mayor of Barcelona.

Although work on the stadium was not yet complete, more than 90,000 spectators were able to witness the event, which continued with representatives of all the major football clubs in Catalonia parading on the pitch, as well as members of the club’s other sports teams and the supporters clubs. The new Stadium Anthem was then performed and the first game to be played at the Camp Nou kicked off at half past four in the afternoon. FC Barcelona played a friendly against Polish side Warsaw. The first Barēa line-up ever to appear at the Camp Nou featured: Ramallets, Olivella, Brugué, Segarra, Vergés, Gensana, Basora, Villaverde, Martķnez, Kubala and Tejada. A different eleven took to the field in the second half: Ramallets, Segarra, Brugué, Grącia, Flotados, Bosch, Hermes, Ribelles, Tejada, Sampedro and Evaristo. Barēa won the match 4-2 with goals from Eulogio Martķnez (whose 11th minute strike was the first goal ever at the Camp Nou), Tejada, Sampedro and Evaristo. At half time, 1,500 members of the Agrupación Cultural Folclórica de Barcelona danced a huge sardana and freed 10,000 doves. And so it was that a brand new period in the history of FC Barcelona had begun.