Another near perfect season

Another near perfect season

Xavi Pascual’s team just can’t manage the prefect season. For the second time in a row, Barēa won every title but one.

In the 2009/10 season, they let the ACB League slip, and this season it was the Euroleague they missed out on, losing in the quarter finals to the eventual champion, Panathinaikos of Greece.

The first official competition of the season was at the Palau Blaugrana. The Catalan Federation decided to go back to the Palau after the disappointing turnout the previous season at the Palau Sant Jordi.

Xavi Pascual’s team found it harder than expected to defeat Assignia Manresa (78-71) and then to win the final against DKV Joventut of Badalona for the second consecutive season (95-79). Terence Morris was named MVP of the Catalan League. 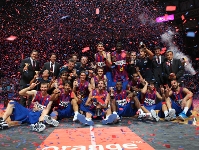 Regal Barēa were also favourites for this competition, which uses a shortened format to the one used for the cup, although many pundits felt Real Madrid was a strong outsider. But despite their strong roster and a prestigious coach in Messina, the all-whites crashed out in the semi finals (89-55).

Barēa then defeated the tournament’s surprise package, Power Electronics Valencia (63-83), who had won their semi final with the host club Dusko Ivanovic’s Caja Laboral. Navarro was named MVP of the final of the first ACB event of the season.

In February, Madrid was the host for the second time in three years of one of the most attractive tournaments in Europe. After three tense but well played games, Regal FC Barcelona retained the title they won the previous season in Bilbao.

They first faced Joventut in a derby in which the green-and-blacks started strong. But Barēa found inspiration in the second half, especially Boniface N’Dong (18 points), who would always appear at the important moments of the season (86-66).

The semi final was against defending ACB champion Caja Laboral. Navarro was outstanding (26 points), followed by Anderson (17 points) and Perovic (11 points), and Barēa didn’t give the Vitorians a chance (92-73).

In the grand final, like in the Supercup, the media had Barēa down as favourite, but Messina’s Madrid was enjoying a good run of form and also had home advantage. But Barēa once again got the better of the old enemy (60-68). Messina had Navarro man marked all game, but overlooked Alan Anderson (19 points), who went on to pick up the MVP award. 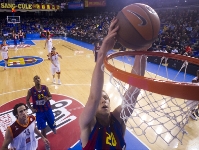 Unlike last season, FCB were not all-conquering in the Euroleague and in the first phase was only 7-3. Group C pitted them against Montepaschi Siena, Fenerbahēe Ülker, Lietuvos Rytas, Cholet Basket and Cibona. It wasn’t easy but few expected Barēa not to qualify, which they did despite injury problems, but only in third place.

In the TOP 16, Anderson and Ingles were excellent as Barcelona swept their opponents with a 6-0 record, including such big wins as one on the road at eventual semi-finalists Maccabi Tel-Aviv.

It all went wrong for Barēa in the last eight against Zeljko Obradovic’s Panathinaikos. The Serbian planned the series to perfection and successfully managed to mark Regal Barēa star player Juan Carlos Navarro out of the action.

They beat the Greeks in game one at the Palau, but then lost a controversially refereed game two and were therefore obliged to win at least once in Athens. Game three was close, but little details made the difference, and they also lost game four, noting the absence of the injured Navarro.

In the ACB League, the regular season was a two-horse race involving Barēa and Real Madrid. Barēa overcame injury woes to finish top with a 27-7 record, while Real Madrid was 26-8, Valencia 24-10 and Baskonia 23-11.