Close but not quite

Close but not quite

The Euroleague Champions of 2009/10 were unable to retain the title, despite being one of the best teams in Europe. The injuries, the great burden of this season, also took a share of the responsibility.

From Paris to Barcelona. Because the stage couldn’t have been better, and because Barēa are ambitious and winners, the European Champions from the 2009/10 season promised maximum effort to achieve the complicated goal, something only Maccabi have been able to do: win the Euroleague in successive seasons. With the Palau Sant Jordi in Barcelona as host for the Final Four, the pressure was even greater.

Pascual’s team knew that this season more than ever, the top goal of all the other teams was to beat the champions. The path to the Sant Jordi stadium was not without obstacles.

From less to more 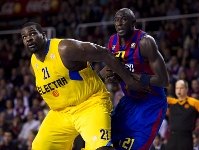 Injuries were key in the early stages of the European competition. The absence of Pete Mickeal (who only played four games in the regular phase), Gianluca Basile (who didn’t play in any) and Juan Carlos Navarro (who missed four group matches and was still not right for the play-off quarter-final) reduced Regal Barēa’s normal brilliant play, something the fans had become accustomed to.

Despite the problems, the players got through the worst moments and became increasingly stronger. Despite losing three games in the first stage and finishing third in the group, tied with the second place team, Fenerbahce, and only one win behind Montepaschi, Barēa came through a difficult Top 16, reaching top spot with a convincing 6-0.

Regal Barca ensured their passage to the quarterfinals with great wins over Maccabi at home, and away in Liubljana, who had been unbeaten in the first phase. Against Lottomatica from Rome, the group's weakest team, the Barēa players didn’t relax and won both matches. Beating Maccabi Tel Aviv was the icing on the cake.

Knocked out by the Champion

The injury toll continued. The long term absences, and other more specific ones, diminished Barca’s potential, and despite having home advantage, they were unable to beat Panathinaikos.

The series, the best of five games, was tough, as anticipated. Barēa won the first game at the Palau, but in the second, the Greeks were able to come back and beat them in a game notable for some strange refereeing decisions, and a technical foul by Navarro, which disorientated the team.

In Athens, Panathinaikos put everything into the games. Although the third game was very intense, Panathanaikos won a tight match, 76-74, and in the fourth match, also very close, the Greek team celebrated getting through to the Final Four in front of almost 20,000 spectators. Later on, Panathinaikos took over Barca’s mantle of European Champions. 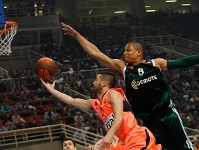