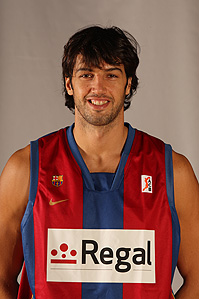 Gianluca Basile, known by his nickname 'Baso', made his professional debut in the 95-96 season with Regio Emilia in the Italian Serie B.

In his second season he helped his team to promotion and once in the top flight he began to make a name for himself with his high percentage shooting. After a year and a half with Regio Emilia in Serie A, he made the move to one of Italy's big teams, Fortitudo de Bolňnia during the 1998-99 season.

During the five and a half years at Bolonia he became a pillar of the team and a real crowd favourite.

He came to FC Barcelona in August 2005 at the peak of his career after achieving the Italian title with Climamio Bolňnia. In Italy he coincided with Zoran Savic in his last season as a player and when he became technical director of the team.

He is a regular in the Italian national team and also played for the Italian under 22 team.