HISTORY OF THE SECTION 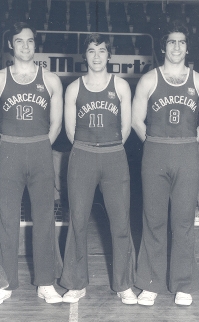 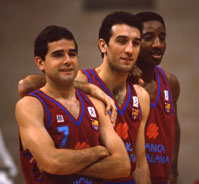 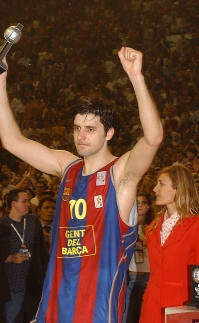 HISTORY OF THE SECTION

The F C Barcelona basketball section has a social and sporting impact second only to football in the hearts of Barēa fans.

Founded on the 24th August 1926, the Barēa basketball team played its early matches in the sports complex of Sol de Baix (between the current Avinguda Madrid and the Travessera de Les Corts). However, basketball was not consolidated in Catalonia until the thirties. In 1940 after the civil war, the FC Barcelona basketball team played in the first division on a new court located next to the south goal of the Les Corts stadium.

The second half of the forties was good years for the FC Barcelona basketball team, which occupied a place at the top of Spanish basketball.

Inauguration of The Palau

Following a period of crisis, the team won the Spanish League and the Generalissimo Cup in the 1958 – 1959 season. The subsequent period of decline lasted quite a long time and the inauguration of the Palau Blaugrana (1971), despite giving the club a push, did not help to give the Barcelona fans the success that they had long been waiting for and Real Madrid remained the most powerful Spanish team. However in the 1977-1978 season Barcelona won the Kings Cup, beating Real Madrid 103 to 96.

In the eighties the team began one of the best periods in history thanks to Juan Antonio San Epifano, “Epi”, Nacho Solozįbal and Chicho Sibilio, amongst others. Thus, in the 1980 – 1981 season, the Club won the league again after twenty-two years of disappointment. In the 1984 –1985 campaign, FC Barcelona achieved their first European trophy winning the Cup Winners Cup against Zalgiris Kaunas (77 -73). They did it again the following year against the Italian side Scavolini (101-86). Then, in 1986 – 1987 the team won the European Super Cup, initiating a period of supremacy which would last for three consecutive years (1987-1990).

At the end of the twentieth century, the generation of Andres Jimenez, Audie Norris and Epi made way for Juan Carlos Navarro, Rodrigo de la Fuente, Roberto Dueńas and Pau Gasol. For a period of ten years the team kept up the standard achieved in the eighties and won four leagues titles, three of them consecutively, as well as the Kings Cup (3 times) and the Korac Cup.

However definitive recognition at a European level came in 2002 -2003. The Barēa of that time, led by Dejan Bodiroga, Sarunas Jasikevicius and Navarro himself, won the long-awaited Euroleague title, formerly known as the European Cup, overcoming Benetton Treviso in the Final Four in a packed Palau Sant Jordi That same year the team also won the ACB league and the Kings Cup.

Since then, the FC Barcelona basketball team has remained among the elite of European basketball, winning more titles both in domestic competition and in Europe. The high point of the decade was undoubtedly the 2009/10 season, when coach Xavi Pascual brought together a tremendous group of players featuring Juan Carlos Navarro, Ricky Rubio, Fran Vazquez, Erazem Lorbek and Pete Mickeal. The list of honours won that season is impr4essive by any standards - the Catalan League, the ACB Super Cup, the Kings Cup and the Euroleague (the second in the Club’s history), won against Olympiacos in the Final Four in Paris.