The Saldes Blaugrana Supporters' Club celebrated their ten year anniversary last Saturday with a dinner and the head of the Comissió de Penyes, Xavier Ilincheta, was there to represent FC Barcelona.

Ilincheta was accompanied by Sport newspaper director José Luis Carazo, former hockey star Joan Vila, and former first-team player Joan Torrent for the event that saw a talk given under the heading 'L'Actualitat del Barça'. The dinner took place at the local civic centre and many of the subjects discussed surrounded FC Barcelona and how the club is seen around the world.

Torrent was the big attraction and he signed autographs and posed for photographs with everyone who asked. Local councilor for Bagesm, Berguedŕ and Cerdanya, Ramón Burniol, joined him on the head table along with Saldes' mayoress, Dolors González, was present to give her support to the group and to the task that she is carrying out at the Parc Natural del Cadí-Moixeró.

When the meeting ended everyone headed across to the supporters' club premises to watch FC Barcelona's encounter at Real Zaragoza live on television. 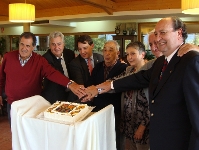