On October 18, Josep M. Barnils, Director of the Social Commission, was interviewed on the Lounge show on Denmark’s TV2/Lorry, presented by Jesper Vorre Rasmussen.

On occasion of the two Champions League matches between FC Barcelona and FC Copenhagen, matches that have caused much expectation, the Danish media are making a big thing of the first meeting of the two clubs at this level.

Despite having lived in the Danish town of Roskilde for 17 years, Josep M. Barnils has always kept up to date with what’s going on at the club, and even plays a role in the social areas of the Club. As Director of the Social Commission, Barnils spoke about the role of foreign supporters clubs, despite the distance from the city of Barcelona. In his role, the fact that he lives abroad means he directly sympathises with supporters clubs around the world.

Speaking more personally, he explained how family tradition led him to take an active role in running the club. His father edited several Barēa magazines, while he himself has been a member for 46 years, and has followed the club all his life. During the interview, he set an example for people that have left the country, but have not let them stop them supporting their team from afar. Rasmussen was clearly interested in speaking to somebody that is so directly associated to FCB, and even works for it, but that now resides in his country.

The interview ended with a discussion of illustrious Danes that have played for the club over the years, including the great Allan Simonsen and Michael Laudrup, and of his views of the forthcoming clashes between Copenhagen and Barēa. 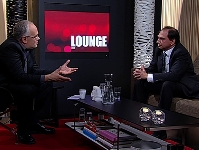 The Danish presenter also guided the conversation towards more institutional matters, and asked his guest about the election process and the proclamation of the new president of FC Barcelona. In this time when most clubs have become limited companies, it is always of interest to foreigners to learn that Barēa is still in the hands of its members.