The club was represented by the vice-president of the Área Social, Jordi Cardoner, who was accompanied by Pau Vilanova, director of the Comisión Social, and the ex-player and currently director of the Área Internacional of the FCBEscola, Julio Alberto Moreno, as well as Liberato Lartuna, delegate to the Consejo Consultivo de Peńas for Barcelončs Nord. On behalf of the Ayuntamiento de Sant Adriŕ, the councillor in charge of sports, Juan Carlos Ramos, also attended.

Before the meal, very speeches were made. Supporters Club vice-president Joan Gener, welcomed the guests to the event and was followed by the president, Enric Atencia, who thanked the FC Barcelona representatives for their presence, whilst Juan Carlos Ramos explained that the Mayor had been unable to attend, but stressed the importance of the club in promoting sport within the town.

Jordi Cardoner began his speech by praising all the Pilars present (the 12th October is Pilar’s saints day) and stressed the importance of women in the life of the Club. Cardoner explained that although only 23% of club members were women, it was clear from the event that their presence was in fact much greater.

The club then paid homage to its founder and first president Salvador Aragall. FC Barcelona saluted the great job he had done at the start of the club’s history and the rest of the club’s founders, who started with the tradition of hiring coaches to take the club fans to the Nou Camp, also received the thanks of those present.

Once the speeches were done, it was time for eating and dancing, which continued until late into the evening. 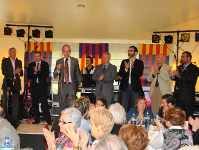