Three coach loads of Valencians came to the picturesque village of Piles at lunchtime on Saturday 20th February made up of members of the Safor, Almoines, Oliva, Vallbarńa, Miramar, Teulada, Ondara, Benissa and LlĒria supporters clubs. 120 people from 9 clubs in the Valencia region who had come to celebrate the dinner with members of clubs from the host club and others from the surrounding area.

The dinner for nearly 200 people was accompanied by speeches, videos, visits from club directors and the presence of the three trophies won last season. It was real supporters clubs party. 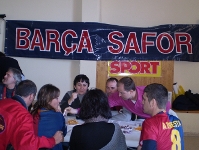 Representing FCBarcelona was club vice-president Jaume Ferrer and director and President of Barca Barńa AtlĶtic, Jacint BorrÓs, who experienced the fine atmosphere between the supporters clubs at first hand.

Fireworks and a chorus of the Barca hymn got the proceedings underway as the three trophies were carried into the supporters club clubhouse amidst much cheering from the members. Piles Mayor MagĒ Balcells welcomed everybody to his town and after the dinner was eaten a series of Barca products were raffled off and a commemorative souvenir was presented to all the clubs present.

Host club President Jordi Castells then thanked the Directors and organisers of the act, whilst Salva Torres on behalf of the Consell Consultiu de ValĶncia and Pere Cols, President of the Agrupaci¾ de Penyes de Tarragona Nord praised the number of members at the dinner.

Jacint BorrÓs and Jaume Ferrer closed proceedings and were presented with a souvenir by the supporters clubs as a thanks for attending the meal on what was also a match day. 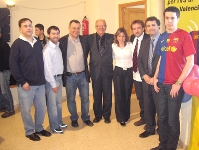