A 2-2 draw was not enough and Barēa Sorli Discau’s OK Liga bid is over. But the draw keeps Reus in the hunt for the trophy. 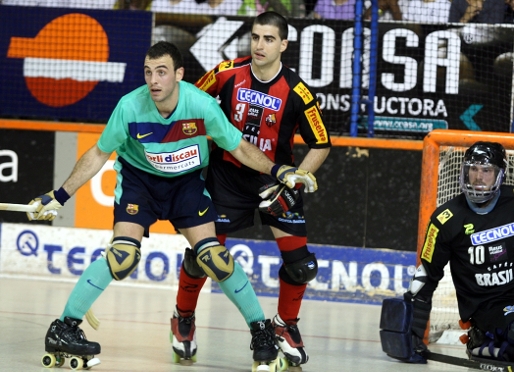 Referees: Galįn and Gómez
Only a win would be enough to keep Barēa Sorli Discau’s chances alive in the OK Liga, but it was the home side that opened the scoring before Jordi Adroher equalised. Borregįn then put FCB ahead before a second from Marķn confirmed the draw. 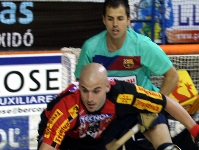 The game got off to a hectic start, with both goalkeepers being called upon early, to the extent that both coaches made quick changes. But it was the excellent signing of Raül Marķn who put Reus ahead with a tremendous goal, which produced tension and cards from the referee. The rest of the half saw some excellent play from FCB, but they weren’t rewarded with a goal until seconds before half time, when Adroher, immediately after a timeout, finally beat Reus keeper Guillem Trabal.

In the second half, Reus seemed keener on playing the waiting game, which handed Barcelona a free reign in the centre of the court. Chance after chance fell to the forwards, and an FCB goal looked inevitable, and finally came though Alberto Borregįn with a powerful long shot. However, the Barcelona joy was short-lived, for in the very next play, Marķn added his second to bring things back level.

The game ended in gripping fashion, with both keepers producing key saves, and Barēa dangerously poised on nine fouls. And so it ended, 2-2, a score that ends Barcelona’s title hopes, for they are now six points adrift of league leaders Reus.