Barēa Sorli Discau lifted the Spanish Cup for the 18th time, three years after their last win in the competition and reaffirmed their position as the Cup Kings. 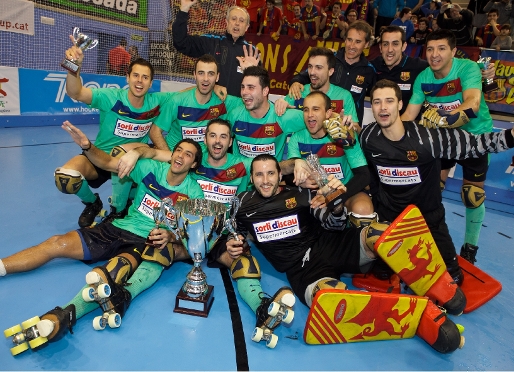 There has been an unusual gap of three years between the team’s lifting their 17th trophy in 2007 in Alcoi and their victory this time around in Blanes. It’s always a tough, but open competition, with all eight teams involved starting with the same options.

The team got to the competition full of desire to win, particularly given the situation they were in in the OK Liga. They had three tough games where they would need to be strong both physically and mentally.

Ferran Pujalte’s team began strongly and Vilanova were never able to keep up with them and were unable to deal with a solid and dominant Barēa.

Even though Barēa are the team who have won most titles, with 18, there have been a total of 17 teams who have won the competition.

Barēa’s roller hockey team won their first Cup in 1953 in the final against Espanyol - the first final the team had ever reached. Following that, they lost three consecutive finals against Espanyol, but once their city neighbours’ form dipped, Barēa gradually began to become dominant. They started to be a regular in finals and the Museum began to fill up with trophies. The best moment came between 1985 and 1987, when Barēa won the trophy three years on the run, beating Liceo in all three finals.

Espanyol, Liceo, Reus and Voltregą all won more trophies, with Espanyol the top team in the early years, chalking up 11 in the first few years of the competition, Voltregą then took over the mantle and won 5, Liceo’s 9 came from 1982, whilst Reus won 7 titles between their first in 1966 and their most recent in 2006 in Lloret, when they beat Barēa.