Barça Sorli Discau beat Saint Omer 8-2 to confirm their presence in the Final Eight after just four games of the regular European season. 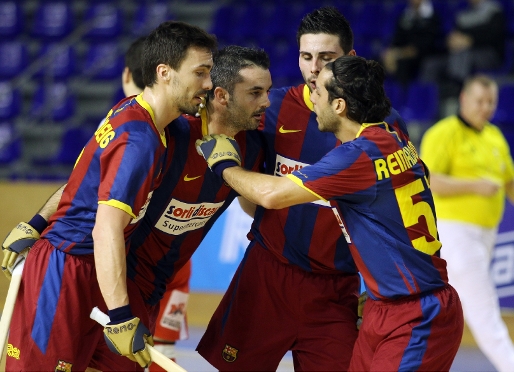 Referees: Floessel and Niestroy (GER).
Barça were in charge from the off and the win not only sees them through to the next stage of the competition, but is also a great boost ahead of next week’s Spanish Cup.

The reserve team, with MVP Octavi Tarrés, were applauded onto the court before the game as they offered the Copa Generalitat they won a few weeks ago to the home crowd. Just before the game, it was also announced that Carlos Lopez would be rested following a reoccurrence of the back pains he’s been suffering from for some time.

Five goals before the break 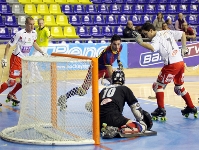 Although Saint Omer started the game well positioned on court, forcing Barça to work hard to find space, the goals soon began to fly in with Mia Ordeig opening the scoring and only a good stop from a penalty by the French team’s Catalan keeper Carles Cantarero putting off the second soon after .

He was unable to do anything moments later when Alberto Borregán fired in a strong effort and the visitors were now beginning to look more ragged as the captain scored a third from another penalty. Ferran Pujalte called a time out to let his players catch their breath and bring on some players from the bench and Jordi Adroher rounded off a quick counter to make it four.

The half finished with a fifth goal after Panadero fired home to round off an emphatic first period for the hosts. 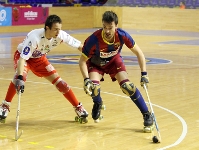 With Sergi Fernández again taking over in goal from Aitor Egurrola, Barça were again in amongst the goals at the start of the second half, as Jordi Adroher and David Páez bagged two more in the space of a minute to make it 7-0.

With the game won, Barça took their foot off the gas and after hitting the post, Saint Omer finally got on the scoreboard through Munger. A second followed from a Dolce penalty – which also saw a blue card for David Páez – but Reinaldo García got his first goal to make it eight and finish off a convincing win for Barça.

As the clock wound down, youth team player Jordi Gabarra got his chance and came on for the last few minutes.