Pujalte: “The team knew how to suffer”

Pujalte: “The team knew how to suffer”

Ferran Pujalte stressed the importance of the hard work his players put in: “they have put their enormous quality at the service of the team and they’ve also shown that they are able to knuckle down and work hard”.

The Barça Sorli Discau coach gave his take on the game: “we started very well, with two posts in the first minutes, a goal and a number of other chances, but when they equalised, things got tougher and there were signs of weakness at half time. We had to find ourselves again and we did that and we knew how to deal with the difficult moments after the break. Maybe the score flatters us, but we deserved the win”.

Pujalte saw the team’s spirit of sacrifice as having been key to the win: “the skilful players put their quality at the service of the group, but today they showed they are able to knuckle down and work hard. We were up against a powerful opponent and we really had to grit our teeth. The team showed they could do the hard work too”.

With the league taking a break next week, there will be plenty of time to savour the victory: “we can just enjoy this win for a couple of days now and then turn our attention to the next game in Igualada,
which will be a tough game. We will go after the win as we need the points in the league”.

Below are some of the players’ reactions:

“It was hard to get here because we are having a bad season. This will help us relax and we have started the year well and know now how we have to continue”.

“You never win a title without suffering. Although we won 7-2, it was difficult and Liceo maybe did enough to score more goals. The second half decided the game and it came down to penalties they missed and we didn’t”.

“It’s always great to win like this. With the bad results in the league and the defeat in the Super Cup, other teams were beginning to lose respect for Barça”.

“I’m very happy -we knew it was important to win here today and get rid of the bad taste of the defeat in the Super Cup. We gave everything we had and we got our reward”.

It ended in a big win, but the game was wide open until 10 minutes before the end. They had to open up and we took advantage of that . Let’s hope we can add more titles”.

“This was undoubtedly a difficult and hard fought win. It’s always hard to beat Liceo. Now we have to continue in this vein in the other competitions”. 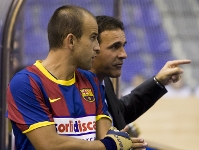 Ramon Cierco couldn’t have made a better debut as Director with responsibility for the section. In his first game in the role, the team won a title: “I’m very excited, but that’s just an anecdote. The most important thing is that the team won and I’m celebrating that for them, they deserve it. If the team play like this then I’m convinced that more titles will come along”.