The first title of the 2010/11 season for Barça Sorli Discau was the Club’s 16th Copa Continental and confirms the Club’s position as King of this competition.

Both in its time as the European Super Cup and also as it is now known – the Copa Continental, Barça have dominated the competition.

The competition has changed its format since 1979/80 when it was inaugurated and Barça won the first edition beating Giovinazzo 9-4.

Barça are the competition’s dominant team with Liceo and Igualada, with five wins each, in second place. Porto, Barcelos, Noia and Reus have each won once. 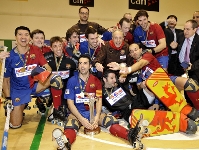 When the competition changed its name in 1997/98, Igualada won twice on the run before in 1999/00 Barça again took over and won three titles on the trot. Although Liceo won it in the 2002/03 season, Barça then won it again for the next five seasons. 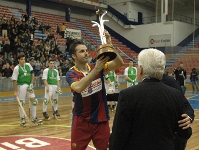 Since 2006/07 the Copa Continental has been played over a single game and Barça have won on three of those occasions: in 2006/07 they beat Vilanova in Dinan, France, in 2007/008 in Pamplona they beat Tenerife 3-1 and this season they beat Liceo 7-2 in Bilbao. In the 2009/10 Barça didn’t play in the competition, as they had not won the European League and Reus took the trophy by beating Mataro 1-4 for their first Copa Continental title.