Sorli Discau defeated Grup Lloret in a thrilling, yet complicated, encounter in the second round of matches of the OK Lliga. Carlitos netted a double while Teixido and Masoliver added one apiece in the victory.

The Catalan outfit were able record their second win of the new season in a game that saw early chances created by both teams. Both goalkeepers were called straight into action and Egurrola had to be on his toes for Barça to keep Lloret out.

Lladó and Marc Tibau then had chances at the other end while Jordi Rodríguez went close before the home side were unable to score a penalty after Masoliver had committed a foul. Four minutes later and it was Masoliver that could have netted the opener, but that too did not go in.

With 18 minutes on the clock the home team did take the lead when Rodri beat Egurrola, but Barça looked to bounce straight back Lloret were forced to hold on as half-time approached

The goals began to flow almost immediately after the restart as Barça drew level when López netted the equaliser and he was then on hand to draw the Blaugrana level yet again after Casalí had put Lloret back in front with a fine effort on the half-hour mark.

For the first time in the game Barça then took the lead with a third goal in as many minutes when Teixidó beat the keeper to make it 2-3 and then Masoliver swept home what was to prove to be the eventual winner in minute 44. From then on Barça looked prepared to hold their lead and their opponents were faced with a tough task of scoring twice just to earn a draw.

In the final minute of play, Lladó was able to reduce the arrears for Lloret with a penalty after a foul by López. David Páez and Sergi Panadero did not play in the game after being rested due to respective muscle injuries. 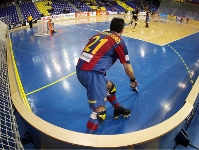