Xavi Pascual celebrated his 100th game in charge of Barça Borges with a a hard fought win over Ademar that sees them through to Sunday’s Copa Asobal final –the twelfth appearance in the club’s history.

Only four teams have beaten Barça Borges since Xavi Pascual took over and Ademar again failed to join them, despite giving Barça a hard game. Rutenka, Igropulo and,as always, Saric proved decisive in the win that gives them the chance to go for their seventh Cup title on Sunday.

Laszlo Nagy captained the team and opened the scoring. Juanín García, with four goals, joined in and Barça were soon 6-3 up as Ademar struggled to deal with Barça’s 6-0 defence and only
Montoro and Cutura looked able to break the hosts’ early hold on the game.

Ademar upped their game, and although Sarmiento kept the goals coming for Barça, Ademar took advantage of two exclusions which left Barça in numerical inferiority, to move into a 10-11 lead.

The game was being played at Ademar’s pace now and the Leon team were forcing Barça into a series of hurried mistakes as Ortigosa , Vega and the keeper Venio Losert with four consecutive stops, helped the visitors take a 15-11 lead, which an Igropulo strike cut to 15-12 at the break.

Whatever Xavi Pascual said to his players at half time seemed to work as they drew level with three quick goals in the first four minutes. Rutenka now stepped up to the mark and began to show the kind of dominance expected from one of the world’s best players.

Saric who’d stopped the first shot he’d faced after coming on, but was unable to stem the tide on the first half, also started to show his worth to the team with a number of fine stops including two penalties and Barça Borges were back in front after 17 minutes (17-16).

Now the league leaders were firmly in the driving seat and as Saric continued to make some fine saves, Barça Borges held on against opponents who were increasingly forced to call on their determination and fight in the absence of the skill needed to overcome Xavi Pascual’s team, who finally ran out 29-26 winners to ensure their place in Sunday’s final. 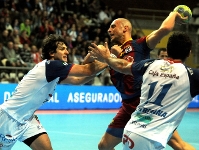