Barça Borges made it five wins out of five so far this season in the Asobal League by beating Quabit Guadalajara at the Palau. Xavi Pascual’s team had the win all wrapped up after half an hour.

With Club President Sandro Rosell and Vice President Jordi Cardoner in the crowd, Barça Borges won the game in the first half when they raced to an 18-10 lead and although the pace dropped somewhat after the break, the team confirmed their place amongst the unbeaten teams in the league. 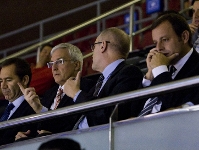 After the great result in Kiel, Barça Borges showed they could be equally ruthless and concentrated against a theoretically weaker opponent who have only just been promoted to the top flight, but who nevertheless came into the game unbeaten with one win and three draws to their name. Nagy gave the team early inspiration, whilst Saubich started the game and caused problems in attack throughout.

BM Guadalajara tried to stem the flow as Barça seemed set to steam ahead and at 9-7 it took some great stops from Sjöstrand, back in the side after his injury lay off and in for the injured Saric, to keep out the visitors.

Once the hosts upped the pace of the game though, there was no way back for Guadalajara and Saubich (6 goals) Oneto and Entrerríos stretched out Barça’s lead to a formidable 18-10 at the break.

Lead goes past the 10 goal mark 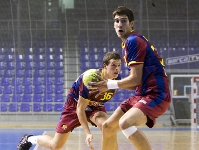 After the break, Guadalajara seemed to accept their fate and the distance went to 11 goals as Barça made it 24-13 after some more fine stops from Sjöstrand, who totalled 18 saves before being replaced by Gonzalo Pérez de Vargas for the last 10 minutes.

Iker Romero was also back in good form with six goals, including a great end to end finish, and Molina’s Asobal debut(marked with a goal) meant that Xavi Pascual finished with three young reserve players on court – another positive note from a very positive game. 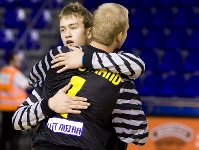