The new sponsor for FC Barcelona’s futsal team, Alusport, has been officially presented by the club. The deal between the club and the Catalan company Alucan Entec Sau is for one season with the option of a second.

The Press Room at the Nou Camp was the scene of the presentation of the agreement between FC Barcelona and Alucan Entec Sau. With this new deal, Alusport Bottles is the new sponsor of the Futsal section and their name and logo will appear on the shirts of the team, now to be known as FC Barcelona Alusport. 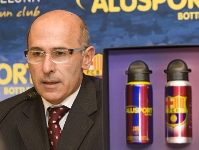 Alusport Bottles is the name of the new bottles which have been launched at the sporting section of the market and are made of high quality aluminium and with a monobloc design. The bottles are made at the company’s Badalona site.

The press conference to announce the new deal was attended by coach Marc Carmona and first team players Javi Rodríguez, Jordi Torras and Fernandao, as well as Board Member with responsibility for the section, Joan Bladé, who expressed his satisfaction with the agreement and “with a trade mark like this which is from here and with an international projection, which will help us take futsal even further”. 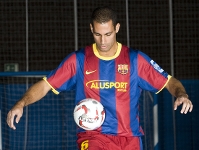 According to Alusport Bottles Director General, Jordi Espada, the deal: “gives us a platform to project our name and sponsoring a team like Barça will help our image and our trademark”

To celebrate the agreement, Alusport Bottles have created a special collection of bottles which will go on sale this month. They will first be sold in the FCBotiga and then through souvenir shops and then put on general sale. 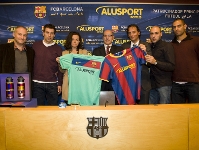 The 2010 collection is made up of three designs: The Hymn bottle has the words of the Barca song engraved on it, The Players has the name of the first team squad on it and the Myths series has the names of some of the Barça greats.