Barça’s Futsal team had to work hard for their fully deserved 3-1 win over Talavera in the fourth game of the league season, but the win puts an end to the two game losing streak and should give the team a boost for their upcoming games.

Talavera defended well, but needed the help of the woodwork on more than one occasion to survive the first half level, as Barça laid siege to their goal. Carmona’s team had opened the scoring early on, but Talavera hit back with an equaliser and it wasn’t until two second half goals from Wilde and Javi Rodriguez that Barça could be sure of the points. 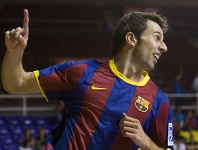 It had all looked like it would be so much easier for Barça when Jordi Torras opened the scoring after just three minutes, but even as the hosts dominated, Talavera hit them with a sucker punch, equalising from a free kick. The visitors then went back into their shell and Barça were all out attack, with Chico and Igor both rattling the woodwork and Talavera’s keeper Jesus Herrero putting in some great stops. It seemed incredible, but somehow, the teams went in level at the break.

Wilde and Igor in charge 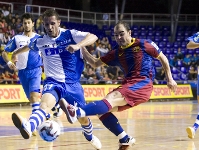 The second period followed the same pattern, with Wilde hitting the post with the first action of the half. Igor was really showing his class now, with a series of clever moves and long range shots, but it wasn’t his day to score -that fell to Wilde who put away the rebound after an Ari Santos shot from wide had come back off the bar to end his own personal goal drought –nearly 80 minutes without scoring.

Talavera were now forced to come forward more as they groped for an equaliser, but Cristian looked solid and captain Javi Rodriguez ended their hopes after Wilde set him up to make it 3-1.

This was a hard won, but well deserved victory for the team, which should serve as a real boost for them after their last two disappointing results. 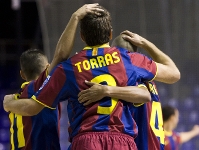 Referees: Felipe and Gereta. No cards