Barça Alusport pulled off a well deserved 1-4 win in the third game of their league title play offs and now have two opportunities to take the trophy. 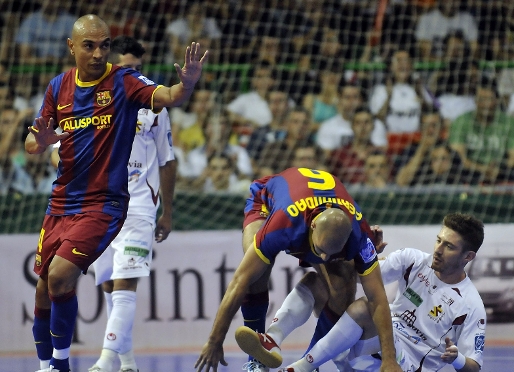 Venue: Pedro Delgado (Segňvia). Capacity crowd of 4.500.
The team came back from a goal down and put in an electric second half performance which gave them a deserved win after showing themselves the better team throughout in an exciting game.

Barça at their best 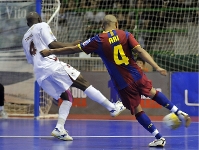 There was a full house at the Pedro Delgado Hall and Barça needed to be at their best to silence the noisy home crowd, who showed their support for their team from the off and the Segovia players reacted with a great start, dominating the visitors and through Lozano, Esquerdinha and Mati they created plenty of danger. It was all built on some individual bursts and counter attacks though and soon Barça Alusports were able to impose their passing game and find spaces to threaten the hosts’ goal.

Lin, Torras and Javi Rodríguez came close to converting the dominance into goals and Saad was unlucky to hit the woodwork after brilliant work from Torras. Igor also saw the post deny him and Carlos failed to round off a well executed move when he fired high.

However, just when Barça looked most likely to open the scoring, Segovia scored when Esquerdinha took advantage of a free kick from just outside the box. The goal increased the pressure in the Hall, where the home fans went wild, but Barça kept their cool and didn’t let their heads drop –not even when Daniel cleared off the line from Lin and Cidăo made a great stop from Wilde, who was surprisingly back in the team after a six week layoff.

Lead taken before the break 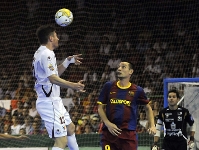 Barça finally got their just deserts for their dominance when Fernandăo hit a scorcher past Cidăo and after Wilde had again hit the woodwork, Igor and Javi Rodriguez connected well and Cidăo’s mistake handed Igor the second to send the visitors in 1-2 at the break.

The second half started in the same way, with Barça’s team game dominating Segovia’s more cautious and individualistic style. Cristian had to be sharp to stop two long range efforts from Lozano.

The referees ignored a clear penalty against Igor, but the Barça players kept to their game plan and Lin rounded off a good move down the wing from Torras to make it 1-3 and then nearly added a fourth on two occasions.

This is the end of a long season though, and as the team took a breather, Esquerdinha hit the post and Cristian made a great stop at Geison’s feet. Segovia were pushing hard now, with the crowd behind them, but they were unable to find a way through the Barça defence and Lin rounded the night off with the fourth late on to leave them in pole position in the playoff series.