The defeat of El Pozo at the Palacio de los Deportes in Múrcia against Manacor (3-4) has allowed Marc Carmona’s team to regain top spot after their own great win in Torrejón.

The Barça players were not distracted by events in Murcia and kept their focus on winning their own game with some superior team work, particularly in the first half, as a brave Carnicer tested the visitors’ defence. The well deserved win brought an extra reward with the top spot. 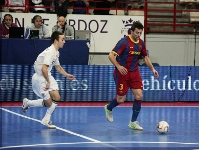 Barça Alusport came out of the blocks flying and within just 5 seconds, Jordi Torras came close to opening the scoring. Wilde was next to try his luck on 30 seconds and again just before the minute was up before Igor had two efforts and a third that came back off the bar. The goal didn’t come, but the start showed how the team were going to go about the game.

The hosts fell back and took the shots, waiting to hit Barça Alusport on the break with their speed, something they came close to converting into a goal when Rivillos had a great chance after a rapid counter.

Barça’s dominance began to wane a little as the game continued, but it was just then that Javi Rodriguexz put them ahead with a penalty on 10 minutes. 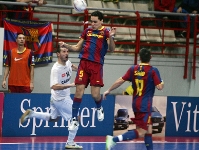 Carnicer tried to hit back immediately and tested Paco Sedano, who was returning to the team in goal, but he responded to the attacks and actually saved the penalty harshly given against Barça for their fifth foul, before the referee even more harshly ordered it to be retaken and Jaison managed to finally put away and draw level.

Justice was done though, when soon after Wilde saw his shot from a free kick go in off Victor to put the visitors back ahead again. Wilde hadn’t seemed to be having a lot of luck in front of goal, but that slice seemed to lighten him up as he grabbed the third with a great shot that beat Prieto just on the stoke of half time that confirmed Barça’s superiority.

Things were much more balanced after the break with both teams looking for goals from long distance as Barça sat back more to defend their lead. Even so, Wilde, Fernandăo and Lin all came close to getting the fourth. The Barça defence stood firm, even when Carnicer sent on their outfield keeper and only Kita with a shot from wide posed any danger.

The win means that Barça Alusport can go into next week’s big game against El Pozo holding onto top spot. 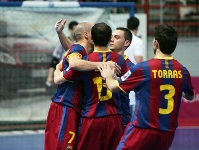 Referees: Cordero Gallardo and Linares López. Yellow cards for Kita and Jaison for Carnicer and Saad and Paco Sedano for Barça Alusport.