Under 17s and 19s take a step towards European Championships

Under 17s and 19s take big step towards European Championships

Six Barça youngsters have been involved with the Spanish under 17 and under 19 squads in the mini-tournaments for qualification for the European Championships. Both teams enjoyed success and will be present in the next stage of qualification.

Juvenil B midfielder Nando Quesada and Juvenil A winger Gerard Deulofeu were with the under 17s and B team defenders Sergi Gómez and Marc Muniesa, alongside their teammate midfielder Sergi Roberto and Rafa Alcántara from the Juvenil A team were in the under 19 squad. Both teams won all their games in the mini tournament held over the last few days in Benidorm and Lithuania and both teams will go forward to the Elite Round, the final step to qualification for next year’s European Championships.

In Benidorm, the under 17s beat Moldavia (4-1), Finland (0-3) and Russia (2-1) to finish top of their group. Both Nando and Deulofeu started all the games and Nando scored against both Moldavia and Russia.

The under 19s also won all their games, seeing off Lithuania 6-0, Armenia 3-0 and beating Israel this Sunday by a similar 3-0 margin to also finish top of their group. In every game, three Barça players started with Sergi Gómez starting all the matches.

The next phase of qualification is the Elite Round to be held in the spring of 2011, when both teams will play for the right to go to the full European Championships, to be held in Sebia(under 17s) and Rumania(under 19s). 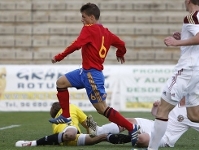