Barēa B came back from an early goal down against Alcoią, with goals from Dos Santos, Carmona, Rafina and Tello to earn a their second win of the season, which lifts them out of the relegation spots. 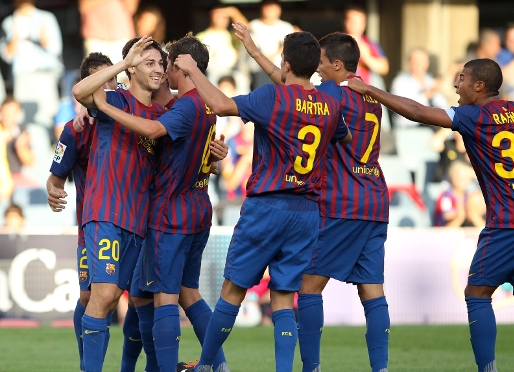 Referee: Sįnchez Martķnez
The B team got their win thanks to their skill in dead ball situations and two injury time strikes to come back from an early goal by Choco for the hosts and the three points lift them now up to 17th in the table.

Alcoią went ahead with their first attack of the game when Choco Lozano pounced on a clearance from a corner to fire home.

That goal had come against the run of play and after going down, Barēa B upped the pace even more, as Rafinha, Deulofeu and Tello all had chances to draw their team level.

That goal came with just two minutes to play of the second half, when Lobato was fouled in the box and Jonathan Dos Santos converted the penalty. This was the first penalty the B team had scored this season, having already missed two.

Barēa’s pressure paid off after the break when Carlos Carmona scored from a brilliantly taken free kick on 72 minutes and although Alcoią launched plenty of attacks, a red card for Esteban damaged their chances and Rafinha and Tello got two injury time goals to round off the result.