Barça B have lost at home to Sabadell in a game in which they enjoyed most of the chances. A cracking goal from Juvenal in the 40th minute was enough to decide the Catalan derby. 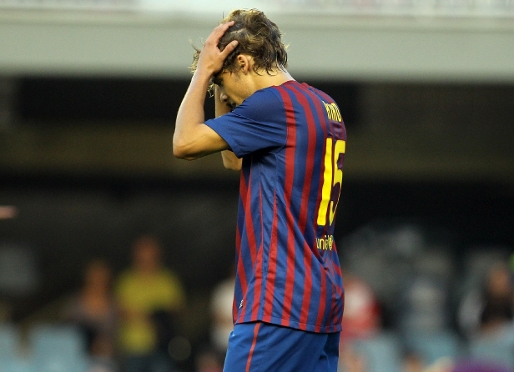 Venue: Miniestadi (6,230 spectators)
Barça B are still without a win at home this season. Lady luck was once again missing in the Miniestadi and Eusebio’s side failed to pick up any points from a game that was theirs for the taking.
There were 6,230 people in the stadium, including a sizeable contingent from Sabadell, to watch a match that was preceded by a minute’s silence in memory of Barça legend Chus Pereda, who died this week.

The Barça reserves had the lion’s share of the possession and chances in the first 45 minutes. Marc Bartra came close with a long range effort, and then Rafinha sent a golden opportunity sailing over the bar. Rodri, Tello twice, Rafinha again and then Dos Santos from a free kick also failed to put the home side ahead. But Sabadell are in the top half of the table for a reason, and in only their third encroachment on the Barça B goal, they broke the deadlock. Juvenall struck the ball beautifully and stunned Mińo in the 40th minute. There was no questioning the quality of the goal, but it was totally against the run of play.

No reward for persistence

Barça B refused to be affected by Sabadell’s goal and after the break they continued with the same intensity. But Sabadell were also a different side, and started creating more and more chances of their own. The last half hour saw FC Barcelona back in command, and there were claims for a penalty on Bartra that the referee preferred to ignore. But the real star of the second half was Cristian Tello, with almost all of the chances involving him in some way. As the game drew to a close, both Carmona and Rafinha were disappointed not to make more of their chances, but there was to be no further score, and it was the Sabadell fans who had smiles on their faces as they made the short journey home.