Two identical goals from Javi Guerra sent Barēa B to defeat in Valladolid. The winning goal cruelly came in injury time after Barēa B had withstood the final 25 minutes with 10 men and was harsh on the youngsters who had more chances than their hosts 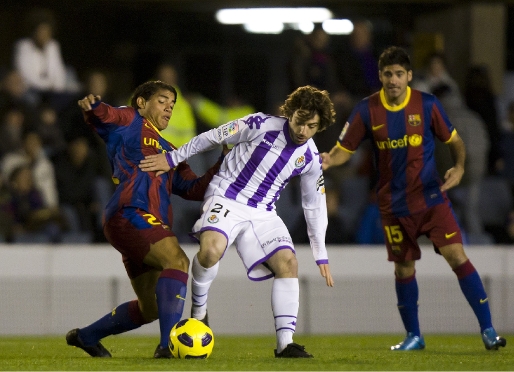 Referee: Hernįndez Hernįndez
Barēa B dominated for two thirds of the game: for the first half and the last half hour of the game, with Valladolid only in charge at the start of the second half when their top goal scorer Javi Guerra put them ahead and they also missed a penalty. Barēa B hit back immediately and Baraja put through his own net to level the teams again, before Javi Guerra scored a carbon copy of his first in injury time. Luis Enrique’s team, who lost Carmona to a red card in the second half, can consider themselves unlucky as they undoubtedly deserved more. For their part, Valladolid are just two behind Barēa B as they strive to return to the top flight next season.

Barēa B began playing their stylish, pacey possession football from the off and both Benji and Edu Oriol had chances to open the scoring, whilst Jonathon Soriano rounded off a first half dominated by the visitors with a shot against the bar just before the break. Valladolid’s attempts to hit Barēa B on the break and cause problems from set pieces came to nothing and Oier was rarely troubled.

Valladolid showed a different face at the start of the second half, pressing much higher up the pitch and getting possession themselves, which resulted in Javi Guerra heading home the opener from a right wing cross on 53 minutes. Soon after, Muniesa picked up a yellow which means he is suspended for the next game, when he committed a penalty that Nauzet hit against the post.

Barēa B were on the ropes now and Luis Enrique quickly shuffled his pack, bringing on Espinosa and Nolito for Rafinha and Edu Oriol to regain control. Just a minute later, Baraja sliced a free kick from Carmona into his own net and Barēa went from a possible 2-0 down to 1-1. Carmona himself then picked up a second yellow and with Barēa down to 10 men the game began to open up.

Even though they were a man down, Barēa B continued to attack and Espinosa, Benja and Abraham all had chances to finish Valladolid off, but Javi Jiménez in the Valladolid goal was on top form. Then, just as the game was winding down, Javi Guerra repeated his opener, latching onto a right wing cross to head home in injury time to make it 2-1, a cruel and excessive blow to a brave Barēa B team never stopped attacking and who deserved more from the game.