Barēa B picked up a deserved point away to Recreativo Huelva. The oldest club in Spain went ahead through a first half penalty, but Jonathan Soriano pulled level in the second. 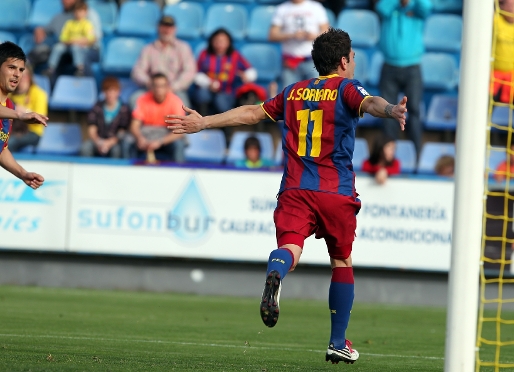 Goals: 1-0 Pablo Sįnchez (p) (min 27); 1-1 Jonathan Soriano (min 67).
The Nuevo Colombino was the venue for a great display by the reserves. Luis Enrique’s side are now unbeaten in nine outings and today dominated the play despite being behind for much of the game. But they battled hard and were eventually rewarded by a Jonathan Soriano goal.

The B team started well, with almost all the possession and creating danger down the wings. Recreativo were also hit early on by a 5th minute injury to centre back Lamas, but still went ahead after a penalty offence by Armando led to a goal from the spot for Pablo Sįnchez (min 27).

Recre, the side with the second best defensive record in the division, held onto their lead in impressive style. Without Thiago, Dos Santos or Bartra, the B team struggled against the rock solid Andalusian defence, and almost went two down after an Aitor effort just scraped wide (min 37). Barēa B’s best chance of the half fell to Benja, but he failed to control the ball in time to beat Recre keeper Fabricio.

Barēa were dominating the possession, but Recreativo always looked calm and composed. Luis Enrique sent on Vķctor Vįzquez and Edu Oriol in the 62nd minute in an attempt to shake things up, and Vįzquez was troubling Fabricio within seconds. Barēa B found a new lease of life, and at last started connecting properly with Jonathan Soriano. And the top goalscorer in the division finally found the net with an impeccably taken free kick.

Rather than settle for a draw, Luis Enrique’s side then pushed forward in search for more. With the home side forced further and further back into their own half, FCB were now on top, as Jordi Masip became one spectator more and Barēa B did everything they could to get the second goal. But sadly it wasn’t to be, and the spoils were shared after an intense evening of football.