Barça B made it five wins from the last six games as they beat Alcorcon 2-0 at the Mini on Saturday evening. Jonathan Soriano, on five minutes and Nolito on 51 were the scorers. 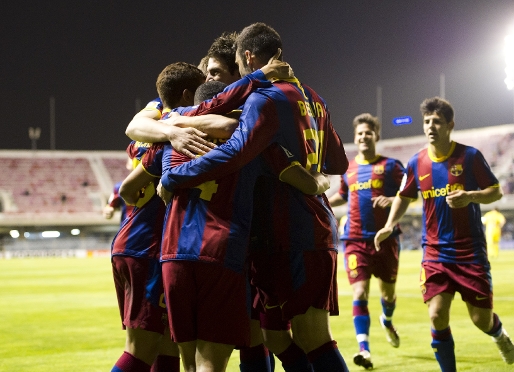 Goals: 1-0, Soriano (5’); 2-0, Nolito (51’)
The main objective of avoiding any relegation issues was reached a few weeks back now, but Luis Enrique’s side are showing no limits to their ambition as they continue to rack up the wins. Although promotion isn’t possible, they would have to be amongst the favourites to make the promotion places, as they currently sit in fourth on 51 points. The game against Alcorcon was a good example of Barça’s ambition, as they swept aside the visitors for their fifth win out of the last six.

Barça B dominated the early stages and laid siege to the visitors’ area, getting their opener after just five minutes when Thiago put Soriano through with a great pass and the striker chalked up his 20th goal of the campaign so far.

Alcorcón get some ball 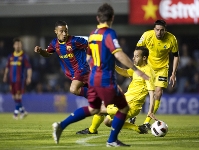 Alcorcón’s confidence began to grow as the game went on and they also started to get some possession and create some danger, with the best opportunity coming on 23 minutes when Carlos Martínez hit the bar after a cross from Montańés.

There were plenty of fouls breaking up the rhythm of the game and Barça B nearly made it 2-0 just before the break when first Benja and then Thiago just failed to get onto a Nolito cross.

The half time break seemed to lift Barça B and just as they had in the first half, they got an early goal when Nolito scored a lovely one, chipping over the keeper after some great work again from Thiago.

The second goal settled the team and Alcorcón were unable to create any chances, particularly once they had lost Rueda on 73 minutes for a second yellow card.

Benja had the chance to make it three, but he was unlucky on a couple of occasions towards the end of the game.