Barça B striker Rubén Rochina has signed for Premiership club Blackburn Rovers for 450,000 euros. He has formed part of the FCB youth system since 2004.

Rubén Rochina is off to England. The 19 year old is the second Barça B player to leave this winter, after Riverola signed for Dutch club Vitesse. 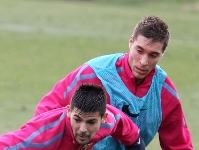 Blackburn Rovers agreed a fee of €450,000 with FC Barcelona, but the latter have the right to first refusal on any potential transfer of the player from Blackburn in the future.

Luis Enrique announced last Saturday that he had proposed a two-year extension to Rochina’s contract, but the player preferred to go with the offer from the Lancashire club.

‘Rochi’ had played 13 second division games this season, and in 357 minutes, had scored two goals. The two previous seasons he had alternated duties between the B side and the Juvenil A youth team. 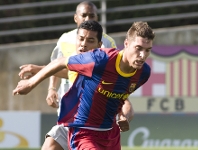 Born in Sagunt, the player came to FC Barcelona in the autumn of 2004 from Valencia. Rochina started in the Infantil A side with Sergio Lobera, and then went to the Cadet B under Fran Sánchez, Cadet A under García Pimienta and then Juvenil B coached by Rodolf Borrell. For the Juvenil A he worked under the orders of Ŕlex García and then for the second time with García Pimienta.