Barça B has ended it run of eight matches without a win on their trip to Salamanca. Luis Enrique’s side dominated the play and fully deserved the three points.

At last the two months packed with bad luck and poor finishing came to an end and put on a tremendous display as they defeated their Castilian hosts.

Salamanca started well and looked the better side for the first quarter of an hour. Héctor Yuste headed onto the post and just a minute later Yuste put his side ahead with a well executed free kick.

But Barça B soon found their touch and strung together their typical passing game to produce no fewer than seven chances in the first half. Nolito, Bartra, Montoya and Soriano all had chances, but the lack of that final goalscoring touch once again stood in their way, as well as an inspired keeper in Biel Ribas. The bad luck ended in the 33rd minute, when Sergi Roberto scored an outstanding goal in which he dribbled passed three players before firing the ball into the back of the net.

That was Roberto’s first Barça B goal for a year and a half, but his joy was shortlived for he was injured in the process and had to be substituted by Rafinha.

Salamanca made an ambitious start to what would be a fast and thrilling second half.

Márquez provided a warning from a dead ball and then a long range effort from Ilie was used by Rafinha to put Barça ahead after 65 minutes with his left foot.

The goal boosted the visitors’ confidence and attack after attack followed, and such insistence was eventually rewarded with goal number three. Rafinha sent a pinpoint pass to Jonathan Soriano, whose shot was parried away by Ribas and Soriano was there to convert the rebound for his tenth goal of the league campaign.

Barça B looked to have sentence the match, but Salamanca narrowed the gap with an absolute peach of a goal from Sarmiento.

Salamanca threw all they could at Barcelona in search of an equaliser, but try as they could, they couldn’t break down some rock solid FCB defending. 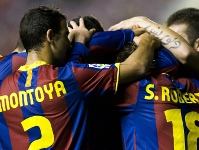