Barça B have lost to Girona at the Miniestadi in game in which Luis Enrique’s side struggled to find answers in attack and where they conceded a late goal just moments after they had equalised.

In the first game of 2011 at the Miniestadi, Barça B let their concentration slip in similar fashion to the last home game against Ponferradina. Girona, without an away win this season and followed by thousand travelling supporters, struck twice, with the winner coming in the 95th minute from Despotovic. The second home defeat of the season means Barça B are winless in eight games. Rafa Alcántara made his second division debut.

Dominance but no damage 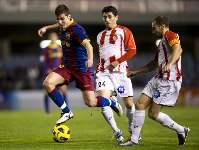 Barça B had 66 % of the play in the first half, but failed to turn that into chances, with Girona smothering each attempt despite being pegged in their own half for most of the first 45 minutes. Girona came close to springing a surprise in the 18th minute, with Kiko Ratón centring dangerously from a dead ball, but no visiting strikers were able to get on the end of it. 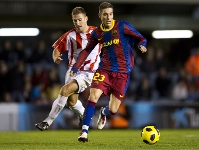 With president Sandro Rosell watching in the stands, Narça B finally produced their first real chances as the half drew to an end. Nolito collected the ball from Abraham and went on an individual run, but his shot lacked the required power. Rochina had a go from the edge of the area soon after, but Girona keeper Santamaria did his job well.

After the break, Girona started taking more initiative and the game was a more interesting affair in every department. Girona were the first to strike, but Marc Bartra brilliantly defended what looked like a killer pass into the box. The same player almost made it 1-0 from inside the area in the 65th minute, but Santamaria once again got in the way. And just six minutes after Barça should have taken the lead, Tortolero got on the end of a free kick to put Girona in command. 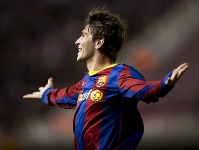 Barça B needed to find an answer quickly, but only a Jonathan Soriano strike onto the crossbar came close to troubling the visiting defence. But just when it looked like all hope was lost, with three minutes of injury time already played, up stepped Soriano to make it 1-1 by getting on the right end of an Edu Oriol ball.

It was just a question of hanging on for a few more seconds, but then disaster struck for Barça B. Immediately from the restart Despotovic, who had just come on as a time-wasting tactic, took advantage of the umpteenth loss of Barça concentration to put his side back ahead. This time there was no coming back, and was a painful way to concede defeat to local rivals Girona. 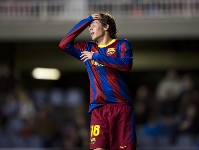 Before the game the Barça B players came out wearing shirt in support of Oriol Romeu, who has a broken meniscus in his knee and will be out of action for at least four months.