Spectacular reencounter with the fans (97-51)

Spectacular reencounter with the fans (97-51)

Barēa Regal could not have had a better debut at the Palau. There were celebrations before the game and then they totally routed an Estudiantes side that could find no response. Ndong led the scoring. 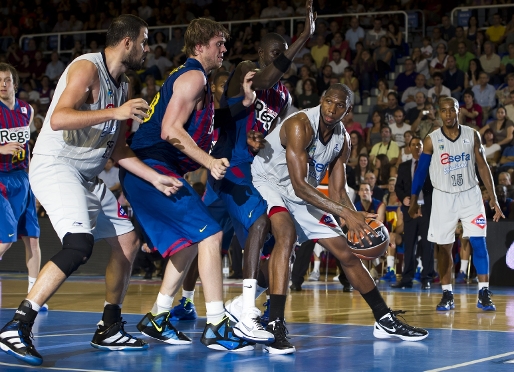 More info
Barēa Regal are 2-0 in the Endesa League and have the same hundred per cent record as the handball and futsal teams. Those teams have an amazing 14 wins in 14 games combined. 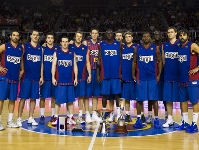 Xavi Pascual’s side got the job done quick against Asefa Estudiantes, in a game that was preceded by the presentations of the teams and the recently conquered Endesa Supercup, and a special mention for European champions Navarro and Sada. But the celebrations continued once the game got under way, with Barēa Regal quite stunning in the way they generated play after play. The win never really looked in doubt.

Power on the paint

The first period was a taster for the offensive festival that FCB were about to put on, with Lorbek and Ndong great from the outset. Estudiantes managed to hold on thanks to Gabriel, who scored all 12 of his team’s opening points.

Barēa opted to mark the Caracas born player out of the game, and he didn’t score again in the first half. Lorbek and Ndong scored 8 each, before Pascual sent on Wallace and Vįzquez who continued the onslaught on the visiting defence. Pepu Hernįndez called a timeout at 24-12, but to little avail. The period ended 31-19. 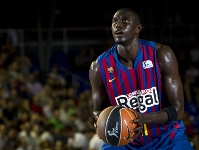 It was impossible to play at such a highly charged rate all the time, and the second period saw a certain resurgence from Estudiantes. Driesen took advantage and the visiting defence improved, but Barēa Regal never really looked troubled. Rabaseda came on to score two threes and the lead was now +18 (43-25), with Ndong still strong in every position. The Senegalese star ended a wonderful half with a terrific basket, although Carlos Jiménez sneaked a late three to make it 47-35 at the break.

Barēa Regal played their best ball in the third period, which they won 28-11, enough to as good as seal the match. They went +30 at 73-42, and then started the final period with a 10-0 streak against an Estudiantes side that by now was resigned to defeat. A highly active Wallace was given a standing ovation when he was substituted, as was the whole team after a spectacular performance that suggests that there is an amazing season of FCB basketball ahead of us.